New Street Adventure - Say It Like You Mean It EP Review

Styled as "the sound of young soul", London's newest indie-soul act New Street Adventure mean business. Their new EP, Say It Like You Mean It, released through Unmasked Recordings is release on May 28th 2012, and first impressions are exemplary. Let's hope that first impressions are, in this case, everything. 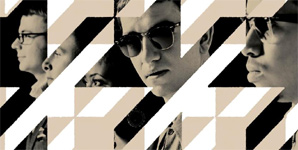 First of all, and in no uncertain terms, there is literally no explicable reason as to why this genre fusion hasn't been done before. It's excellent, a fantastic cross-breeding of the old and the modern. The 'wah-wahed' guitars, funky bass line and excellently placed brass really gives the music a smile-inducing quality. When it comes to the singing, the Arctic Monkeys sounding vocals mixed with the curiously prominent-yet-background-based brass sounds really hits the idea of 'indie-soul' on the head. It's like the idea of soul music has been taken out of context and completely modernised - brought into the 21st century. This is good - it means that the younger generation who aren't exposed to soul music get a taste of it that they can relate to, and for those who already enjoy soul music get to hear something new and fresh. It's win-win, especially for New Street Adventure, who should readily, greedily and deservedly lap up the attention that comes with success. Not many bands have the ability to take sounds that wouldn't be out of place in the 1970's and make them cool. Cue respectful applause.

Problems with the release? Not many. It's got a little bit of everything. It's a dynamic and varied release that keeps the listener entertained all the way through. It has a very 'full' and passionate sound - every song has a lot to listen to, but it doesn't seem like too much. It just means that instead, a listener has to go around and listen again to make sure that they've heard all the elements. If one had to nit-pick, this could get tedious on the sixth listen in a row.

So, therefore. It comes as no surprise that this album looks set to shoot New Street Adventure to stardom. It's very catchy, talented, upbeat and it presses all the right buttons. It will be very surprising if this band don't become very big within the next year. If they don't, it will definitely be a complete miscarriage of justice.

New Street Adventure - Say It Like You Mean It