After spending almost the entire existence of their band's life under some sort of enforced lockdown restrictions 88/89 are now eager to get out and share their music with a live audience, and, they've already got the merch! The duo, who formed in London in late 2019, have been steadily creating their portfolio since the onset of CoVID restrictions began in early 2020. To date the pair, made up of Jack James (born in '88) and former actor Michael Hornby (born in '89), have released a string of singles and one EP. Their latest release, Bite The Bullet, is another of the band's carefully blended tracks that draw on both Rock roots and dance rhythms in a seamless combination that echoes the work of LCD Soundsystem and MGMT. Jack and Michael have also been "planning, crafting, building and working towards making the 88/89 live show something special and pushed ourselves to the limits of what we can do to bring everyone something that will surprise them." Before they play their first live show in London we caught up with them to find out more. 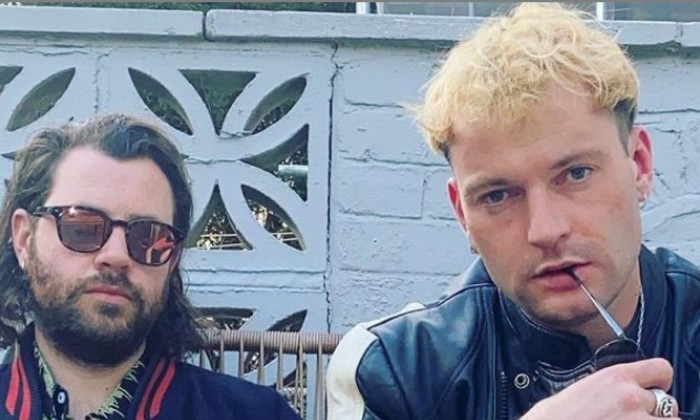 A lot of the time we don’t.. to be honest, we like to let other people listen to the music and tell us what they hear. We could give a list of influences, what we love or have tried to replicate but it’s super fun to let people's imaginations free on it. Now, if a person had never heard our sound and really wanted to know what kind of ride they were in for before they jumped on, I’d say it sounds like two best friends trying to make a rock band in a living room full of synths, drum machines, and guitars. You’re in for an uplifting ride that’s more likely to be found in Alton Towers than Disneyland. And if you like Rock music that gets you going in the morning, or makes you feel like you nailed it after a date on your way to the underground station, 88/89 are your guys.

Navigating a constantly changing editorial landscape. When we started in bands, myspace was the way buzz bands got discovered, NME was still being printed, blogs snowballed a bands momentum. 9 years later all those things have been replaced by Soundcloud, Instagram, TikTok, fine online digital publications and playlists. Everytime we peak our heads above the parapet of the musical trenches we spend most of our time in. The battlefield has completely changed form. Then we find ourselves resisting the urge to retreat back into the cosy trench to just create more music. Luckily we have friends around us that encourage us to get the lay of the land, draw a fresh map and hop out into no man's land.

It’s very difficult but you know that it’s going to be difficult going in. Everyone tells you day in and day out how difficult it will be.. it’s famously difficult! This gave us the advantage of being able to set our expectations at appropriate levels and think about whether it’s really what we love doing. It’s an advantage that you don’t always get in other professions. No one tells you getting a job at an Apple store is difficult, but it is, being a Youtuber, Twitch streamer, advertising creative, and of course, artist - they're all very difficult to make a name for yourself - and you know it.

It’s important that we have creative control over the initial creative process, the raw beginnings, elements and inspiration. But to be honest we haven't yet been in a position where someone else has offered and had the opportunity to offer help with production. When we started the band we felt it had to be self sufficient out of necessity. In order to make it happen we knew we had to be able to do it all by ourselves. Where possible we seek help with the more exact sciences like mixing, but even that is not always possible, so we had to learn that too. Also a lot of the people we idolise set the bar really high with regards to how much they do. When it comes to the final thing though we’re not that precious over the details. So if feedback goes something along the lines of “love the track but the drums are too weird” we hear it.

We draw influence on the stuff we grew up listening to, the records our parents played, sometimes consciously, sometimes we only realise after the fact. Once we came up with a bassline and then realised it was from the demo setting on an old keyboard I had as a kid. A lot of the time influences start more as starting points than overall inspiration. For example we started making the bite the bullet drum pattern because I was trying to recreate the drum sound from Prince’s Batman soundtrack. I say When Doves Cry because people know that song...but it was the Batman soundtrack.. There’s also so much good music being made at the moment we draw inspiration from the determination, ingenuity and courage of so many modern musicians out there.

Assuming you mean alive. It would be epic to work with a producer, either Danger Mouse, his combination of Hip-Hop and Rock production makes things sound earth shatteringly thumping like nothing else we’ve heard. Or James Murphy, the guy from LCD soundsystem. I think he’d bring a fresh creativity, we can get quite stuck in our song structures sometimes and he’s not afraid to let things get weird but he also keeps things really accessible.

For our latest music video we bought a load of random vinyl records to hand paint patterns on to and a record player to spin them. Before we painted them we thought we’d listen to them all for fun. One of them was a record called Man Without Love by Englebert Humperdinck. We secretly fell in love with it, so we kept it and we play it every morning. We've played it so much it's starting to wear out. We keep it in an Aladain Sane sleeve so people don’t see it and one night someone played it and went “oooo Aladdin Sane I love that record…….what the f**k is this?” True Story

We like to set goals that are right in front of us, then when we get there we set another one. That way we don’t get ahead of ourselves and we tend to get s**t done that way. Also as I said we do a lot of stuff ourselves so it’s easy to get lost otherwise. Right now our definitive aim and goals are to put together a live show, the more we work on it the more excited we get about it and the more ambitious we get. We’ve been planning, crafting, building and working towards making the 88/89 live show something special and pushed ourselves to the limits of what we can do to bring everyone something that will surprise them and if all goes to plan and live music opens up again we’d love you to come see!

Gearing up for the release of an album and playing shows, in an ideal world. Once we’ve gotten the live show to the point where we're happy with it, we’ll hammer out the details of the album, get that to a stage where we’re happy with it, knock out a few music videos and hit the road. We haven't released any music outside of lockdown so as you can probably tell we’re very excited about playing some gigs. We’ve even got merch ready!

So we’ve released Bite The Bullet, next up in the coming weeks will be the music video for that track. Then we’ll do a live performance video of it, after that we’ll start gearing up for some live shows. Most likely in London to start with but we don’t have the exact details on that just yet but it’s definitely coming soon. Then we’ve got a bunch or songs we need to sort through and refine for a record. We’ll write some more as well in between now and then!