'Absolutely Fabulous: The Movie' stylist wanted Edina Monsoon to have four camel toes - where the material around the crotch rises in an unflattering way into every crevice. 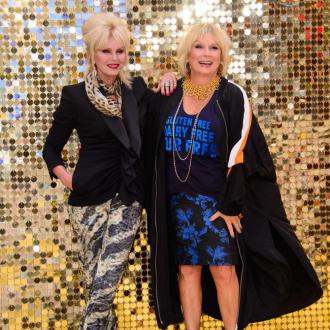 The costume designer Rebecca Hale has admitted she wanted Edina's (Jennifer Saunders) character to have a ''fourth camel hoof'' caused by an ill-fitting pair of trousers that are hitched up too high they gather around the crotch area, but decided against the idea because she wanted to ''tone down'' her eccentric fashion sense.

Speaking to Fashionista.com about her wardrobe choices for the comedy duo, she said: ''And the trousers will always have a camel hoof.

''We were thinking of building a fourth camel hoof and then I thought, 'That's just too disgusting really.' It's not a good look.

''So I decided to tone Jennifer [Edina] down, rather than make her even more outrageous. Because nowadays, one's style is very free.

And the fashion mogul has revealed the inspiration behind the unflattering fashion idea stemmed from 'Keeping Up With the Kardashians' star Khloé Kardashian, 32.

Rebecca explained: ''That was something that Khloé Kardashian talked about. There was a part [on a 2013 episode of 'Keeping Up with the Kardashians'] where they were talking about a flabby camel hoof and that's just the kind of thing that Edina would think about.''

The creative mastermind has also unveiled other traits of Edina's stemmed from Kim Kardashian West.

She said: ''Last year there seemed to be a permanent obsession with Kim's bottom. So I thought, 'Let's put a really big bum into a costume somewhere.'''

Meanwhile, the 57-year-old comedian has banned Kim Kardashian West from starring in any of her films.

Speaking previously, she said: ''That's just internet rumours. She would never make it into one of my films.''