Was AJ Tracey's CoVID breaking Sunday road trip just a way to generate publicity for his new album and end of year tour?

AJ Tracey started this Sunday intending to go ahead with three free meet and greet appearances despite Government rules which say such gatherings and events breach current CoVID19 guildlines. The three appearances were supposed to be in Birmingham, Manchester and Bristol but due to Manchester police being told of a large crowd assembling at Platt Fields Park the last two events were called off. 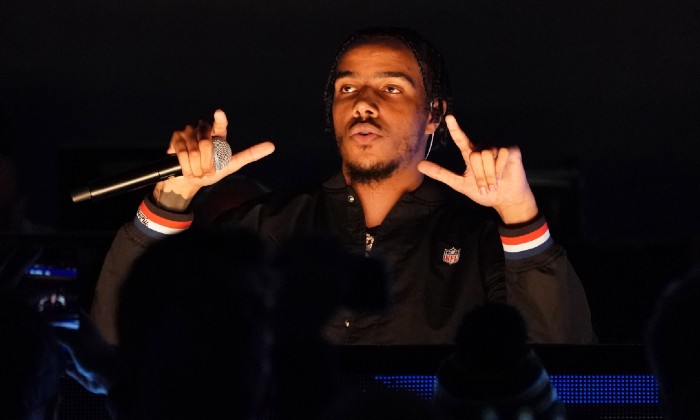 Manchester police issued a statement saying that, "enquiries established that a music event was being held" with Superintendent Caroline Hemingway adding "We are still very much in the midst of a public health crisis and it remains as important as ever to abide by the COVID-19 legislation." After AJ's Manchester appearance was cut short, the Manchester organisers of the event were issued with a Fixed Penalty Notice of £10,000. A police spokesman said, "Unfortunately, we did have a large gathering at Platt Fields park, where police intervention was needed due to the large amount of people in attendance. A fine was issued to the organiser and the crowd was dispersed."

The rapper @ajtracey says he "didn't expect that many people to turn up" to see him at #PlattfieldsPark earlier today @gmpolice say the organiser has been issued with a ten thousand pound fine. pic.twitter.com/KaaMN278Aq

The day before the events were due to happen, AJ had asked fans which cities he should visit. The Ladbroke Grove rapper subsequently took to social media to promote his intended appearances, saying, "12pm - birmingham - dale end, 4pm - manchester - platt fields, 8pm - bristol - turbo island, Everyone invited just turn up!" In Birmingham he was spotted signing CD's in HMV before moving on to Manchester where he ran into trouble because of the size of the crowds. Many hundreds gathered around the basketball courts of Platt Fields Park in Fallowfield, Manchester, where the Brit Award nominee was seen meeting his excitable fans, posing for photographs and exchanging banter before moving on.

After inviting "everyone" to "just turn up" it was odd to hear Tracey say, "I didn’t expect that many people to turn up in Manny and genuinely, yeah man, this is not okay for me to go ahead. I’m gonna head home to London." This is odd for a few reasons; one, AJ has just released a highly anticipated second album, Flu Game, an album that is a strong contender for the number one slot, two, his Twitter account has more than half a million followers and three, he's about the hottest property in UK Hip-Hop and Rap that there is right now.

I'll be back when it's safe to do so, sorry guys pic.twitter.com/XpLcEyXt7J

The publicity that AJ's Sunday road trip has generated has more than compensated for the measly 10k fine that has been dished out; you couldn't buy coverage like this for ten times the amount of the fine. Whilst AJ eventually conceded that it was not safe to carry on with his appearances ("Big love Manny and Brum , thank you for coming out. It’s not going to be safe for me to come to Bristol") surely he should have had the common sense to know that he shouldn't have been doing them in the first place? The first scheduled, authorised, large music event to be given the go-ahead will be a Blossoms gig in Sefton Park, Liverpool, in front of a crowd of 5,000 who have tested negative for CoVID19. That, "near normal", gig is due to take place on May 2nd and will hopefully pave the way for similar events in the future. 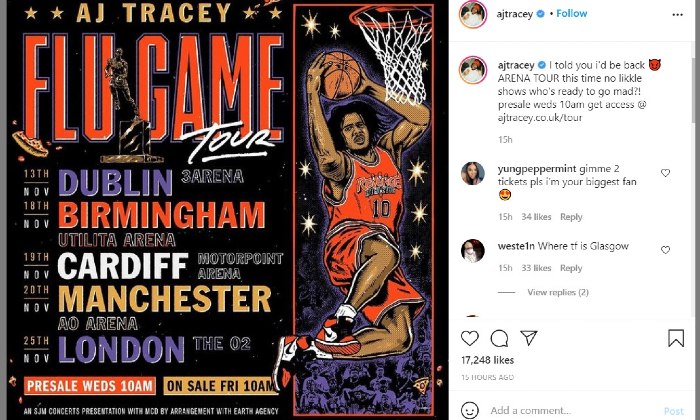 Whilst you could have taken a view either way as to whether or not AJ's intentions were genuine or not, whether he was in fact just naive, or whether or not he was given some very poor advise by those that surround him, you have to question everything again given further social media posts and announcements. Only one day after Tracey had called off his three city tour due to police intervention, and only a day after he had received publicity beyond his wildest dreams he announced a full arena tour! Taking in Birmingham, Cardiff, Dublin, London and Manchester, AJ Tracey's November tour goes on pre-sale on Wednesday 21st April, a mere three days after his CoVID breaking meet and greets.

Has the whole episode just been a cynical way to ensure a huge amount of free publicity for an up-coming tour and a new album? I think that there's a high degree of probability. £10,000 well spent AJ.