Album Of The Week: The 29th Anniversary of 'Bricks Are Heavy' by L7

Following the release of their first two, developmental albums, LA's L7 released what was to be their most commercial and well received record, Bricks Are Heavy in 1992. Donita Sparks and Suzi Gardner formed L7 in 1985, released their debut, eponymous album, in 1988 and then Smell The Magic, via SubPop in 1990. For their third record they combined with producer and engineer Butch Vig (Nevermind) to deliver up an eleven track album that, whilst still capturing the riotous spirit of L7, brought to the fore a more accessible and immediate sound. 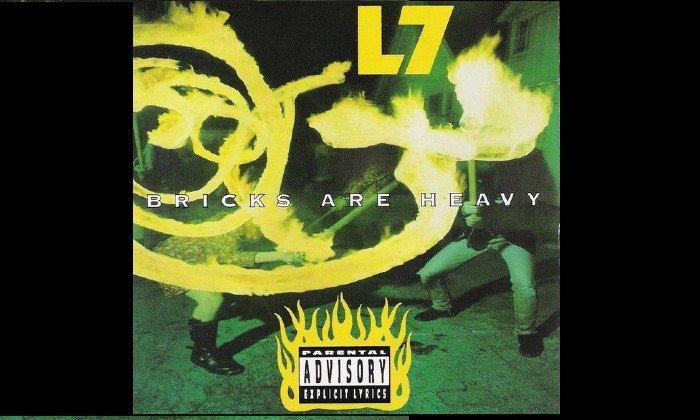 L7's music was generally labelled as Punk from the offset, not only due to the band's sound, but also because of the band's attitude and demeanour. The all girl group, that also came to include bassist Jennifer Finch and drummer Demetra Plakas (replacement for original member, Anne Anderson), were not  wallflowers or shrinking violets, they were raw and intense with a collective feral personality that had no desire to be seen as "eye candy."

L7 were a group that were very much on the fringes of two major movements, Grunge and Riot grrrl, but they weren't outsiders to either, rather more they were inspirational and influential to both genres. L7 had been pioneers in bringing artists together through their women's rights and pro-choice movement, Rock For Choice, and were widely regarded as having given an alternative voice to campaigners and protesters who were against the anti-abortionists.

Although Bricks Are Heavy saw a shift in the sound of L7 under the production of Butch Vig this did not mean that L7 had gone soft or lost any of their fire. When an album starts with a Wargasm, and contains songs with titles that include, This Ain't Pleasure, Pretend We're Dead and Shitlist, you know this is not going to be in any way, sweet, fluffy or apologetic.

Bricks Are Heavy is in fact unrelenting, unflinching and intense with few pauses to take a breathe and little let up in pace or passion. From the thunderous drums and relentless thrashing guitars of album opener Wargasm through to the scuzzy and sleazy Scrap, the never ending aural onslaught of album highlight Slide and the final, slightly more restrained, single, Monster, L7 give it their all. The 38 minutes of Bricks Are Heavy delivers an unbridled and impassioned performance from a group at the top of their game. The confrontational Shitlist is an alt-anthem with a frenzied guitar solo and vocals that a screaming banshee would be proud of whilst Diet Pill is a chugging wall of muddy sound that tramples everything in it's path.

Where Bricks Are Heavy undoubtedly made it's mark however was on a track that embraced a less agitated and more harmonious sound. The first single, and third track on the album, Pretend We're Dead, takes the raw Punk that L7 had grown up on and mixes that with more of a Ramones, Glam sensibility whilst still maintaining an edgy and urgent quality. The vocals are delivered with less shout and more melody and the revolving guitar riffs are blended rather than biting. The percussion is not fighting to be at the forefront and the arrangement is not as confrontational giving rise to a standout piece of Punk-Pop that has more than stood the test of time.

If the likes of Juliette & The Licks, Amyl and The Sniffers or Taylor Momsen and The Pretty Reckless et al have not at least been slightly influenced by L7 I would be very surprised and if Arrow de Wilde and Henri Cash of Starcrawler have not had L7 playing on repeat in their tour bus......

Bricks Are Heavy may not be as widely known as some of the other albums from the early 90's but it's relative importance is significant and it's influence is still reverberating today.