45 years ago AC/DC were not the biggest Rock band in the world, but they had just signaled their intent with the release of 'High Voltage'.

As a new, vital, immediate and pivotal era in music was just about to break, AC/DC signed a record deal that would see them launch their incredible international career. Whilst the new "fad" of Punk Rock was beginning to cause quite a stir with the emergence of bands such as The Damned, The Sex Pistols and The Ramones all breaking on to the scene, AC/DC arrived with their full throttle Heavy Metal. When the band first appeared in the UK they were initially lumped in with the Punk bands of the time, a faux pas you might find a little difficult to understand these days. Aside from the energy and enthusiasm of AC/DC, and the impassioned nature of their performances, there was little else to tie them to Punk. If anything they were exactly what the new generation of Punk bands were trying to distance themselves from. They were then, and are now, a Rock'n'Roll band through and through whichever way you try and cut it. 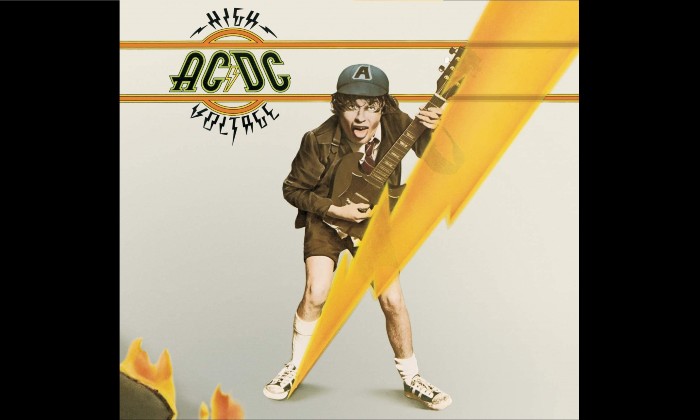 High Voltage was released just six months before what is widely regarded as the first Punk single, New Rose, by The Damned. It was AC/DC's first international release, following two Australia only album releases, T.N.T. and High Voltage, in 1975. The repackaged international album contained tracks from both original albums and set the tone for the flurry of records that were to follow in it's wake. Back when it was released, High Voltage, was not received to universal praise, in fact in some quarters it was heavily derided. A change in music was coming and everyone was desperate for it at the time, which in hindsight is possibly why some reviews were harsher than others. What is essentially the fundamental core of AC/DC then, and since, is what some Hard Rock aficionados and purists found to be offensive.(Bon's bagpipes also divided critics and mercifully didn't become a staple of the band) Angus Young's power chords and Bon Scott's raw and rasping vocals however made a formidable combination but they were loathed as much as they were liked by the critics.

As AC/DC entered a world that was populated by the likes of Led Zeppelin, Deep Purple, Yes and Rush they were to a degree the boys trying to infiltrate a man's world. Angus didn't even look like he was taking himself too seriously, wearing his now signature school uniform on the cover of High Voltage. The music of AC/DC was not like that of their 1976 peers. It was not considered cultured by any stretch, it was not arty, it was not refined and it didn't contain songs that lasted the entire length of an album, thankfully!. The music of AC/DC was then, and has remained, immediate, biting, driven and raunchy.

In an age where everything in Rock seemed to be contrived, over worked, extended, elaborate beyond reason and alien to at least half of the population AC/DC delivered something more tangible, something that wasn't literary, wasn't highfalutin, pompous or in any way pretentious. AC/DC were seemingly simplistic in an era of complication. They were straight forward, up front, unapologetic and more importantly, enjoyable. You're not going to find anything approaching She's Got Balls or T.N.T. on a Yes album that's for sure.

Just because Angus Young chose to drive the songs through seemingly basic power chords didn't mean that the compositions were somehow less worthy of acclaim than any other Rock songs of the day. Live Wire, one of the more restrained tracks on the album, is a great case in point, the song builds brilliantly with some tight and effective percussion courtesy of Phil Rudd. Here too the interwoven guitars of Angus and Malcolm combine to provide a brilliantly worked and arranged soundtrack to Scott's powerhouse vocal performance.

Aside from the somewhat questionable inclusion of bagpipes on the album opener, It's A Long Way To The Top (If You Wanna Rock 'N' Roll), High Voltage has aged quite well to be honest. The suggestive sleaze of The Jack, the incendiary, brutal and pumping T.N.T. and Live Wire still regularly make their way on to live AC/DC set list to this day.

The nine tracks of AC/DC's first international album paved the way for a bright future. "By the time I was half alive, I knew what I was gonna be...Gonna be a rock 'n' roll singer, Gonna be a rock 'n' roll star" came to be a self fulfilling prophecy. No one could have, and no one did, predict that back in 1976, when High Voltage was released, that AC/DC would go on to become not one of, but the biggest band in the world. On the day that Keith Moon was launching the contents of his New York hotel room out of a window, AC/DC launched a career that has been unstoppable ever since, they barely missed a heart beat even when their lead singer Bon Scott died less than four years later. High Voltage delivered what it said on the tin and began a journey that still has no end in sight.