Antipodean singer-songwriter Aidan Whitehall, aka AODHAN, is "stoked" following the release of his latest five track EP in July. The Ryan Miller (Will I Am/Angus & Julia Stone/Jess Glynn) produced set of songs ties together AODHAN's last three single releases, Twelve Again, I'm Closed and Daily Meditation with the title track, Flies In My Room, and another new song, Just Friends. When talking about the EP recently the 17 year old from the Illawarra region New South Wales said, "over the years I’ve experimented with a few different takes on indie guitar pop as well as alternative folk music, and as my list of influences and songs I would refer back to expanded, I gradually took more and more tiny pieces of music that I love and have turned it into what it is now." Keen to take his gentle indie infused folk to the next level, release an album and tour abroad, the young Australian is full of ambition. Before he gets too busy we caught up with him to find out a little more. 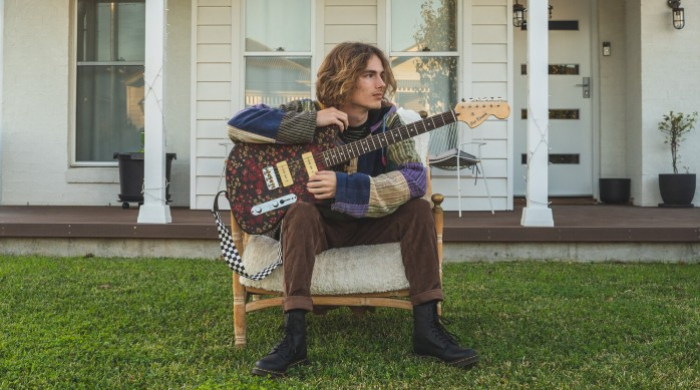 I think there’s this mix of acoustic folk and dreamy guitar pop. There isn’t always a perfect balance between the two. Sometimes I’ll make a song that sounds more folky but most of the time I’ll go for an indie guitar pop sound.

I’m pretty glad to say that I haven’t felt very challenged by anything yet. Apart from not being able to play shows and stuff due to a global pandemic, things have been pretty smooth so far. That probably means I’m due for a challenge of some sort soon.

I think a lot of other artists can agree when I say it’s not an easy thing to do. Especially in Australia where the industry is really not well supported. However, I have learnt that it isn’t impossible to make it work but it won’t exactly be a walk in the park.

Very important. I want to make sure that I’m stoked about whatever I release. That feeling of knowing something was missing or could’ve been improved or different is really not the feeling you want to have when producing and sharing new work. But when [I do work] with other artists, I work with a pretty open mind.

Mainly from other artists such as Josh Pyke, Dayglow, Wallows, and way more. I find a lot of what I grew up listening to has rubbed off on me and has shaped my tastes and influences as well. I also get inspiration from my own experiences and feelings.

I think working with Tia Gostelow would be pretty cool. Despite her being a little more ahead than I am, we both have quite a similar career, quite similar tastes I think. I could definitely see a really cool song come out if it.

I’m a bit of a geek. Really enjoy playing video games, especially of the medieval/fantasy genre. I love films too. All over the MCU stuff, Scott Pilgrim is my favourite movie. It’s all good fun.

Yeah definitely! Overall I just wanna go as far as possible. But particular goals would include going overseas to play shows, have quite a large discography of music, eventually being able to record, produce, mix and master all of my own music on my own. That would be amazing.

Hopefully [to] have already played a couple more festivals and headliner shows, perhaps announcing a debut album, have a fair few more fans.

I’ve got a little more music on the way! My team and I also have planned a nice little tour in a couple months time so fingers crossed that all goes ahead! Unfortunately there was going to be a lot more but due to COVID most of it got cancelled. But there will definitely be a bit more in the next few months!