Sun, Sea, The Scenic Stage and Sports Team; what's not to like?

Before it plays host to some iconic artists and acts, including Billy Ocean, The Specials, The Kaiser Chiefs and James (Among many others) Dreamland will open it's gates for the first major musical event it has hosted since lockdown restrictions were lifted. The heritage theme park has already entertained guests this year with a limited amount of socially distanced events, including the screening of the EURO 2020 football tournament but Sports Team's Bus Trip All Dayer will be it's first proper gig this year. 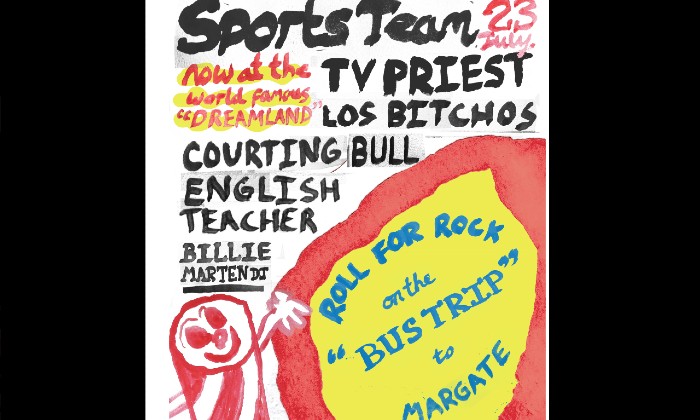 In it's hey-day Dreamland attracted major acts such as The Who, Deep Purple, Status Quo, The Bay City Rollers and even The Rolling Stones. Whilst it's former glory days may be long gone the rejuvenated and sympathetically redeveloped Dreamland of recent years has started to bring back some great bands and put on some spectacular festivals.

The Kills, Orbital, Happy Mondays, Wolf Alice, PSB, Everything Everything, Foals, Hot Chip, MARINA and most notably Gorillaz have all performed on one of the many stages on the Dreamland site.

On Friday, in the shadow of the UK's oldest wooden roller coaster, Sports Team and their invited guests will perform on the Scenic Stage for their Bus Trip All Dayer. Joining them will be a whole raft of up-and-coming talent including Sub Pop's TV Priest, Popshop! band Courting and Marc Riley favourites, Los Bitchos.

Also on the extended bill are Rhian Teasdale and Hester Chambers, aka Wet Leg! The Isle of White duo have just secured themselves a place on BBC6Music's 'A' playlist with their superb debut single, Chaise Longue. Catch them on the way up is our tip as they're most certainly destined for big things.

Sports Team's All Dayer began initially by "Starting as a humble bus trip on a 30-seater with no aircon three years ago" and has now blossomed thanks to the popularity of the London based band. As well as sharing the stage with the likes of Green York band Bull and R&B band English Teacher they will also be sharing the profits; "raising money for Stagehand Crew Relief Fund and Music Venues Trust".

The event was initially scheduled to go ahead in the 160 capacity basement of Elsewhere, a record store a few hundred yards away, but due to demand Sports Team et al will be playing in an area that can hold 5,000!! Quite a leap but one we're sure the athletic Sports Team can easily make!