Steve Harvey is this comical juge with hilarious cases mixed with a reality show flare that airs on ABC, and the mobile-video subscription is available on Hulu. 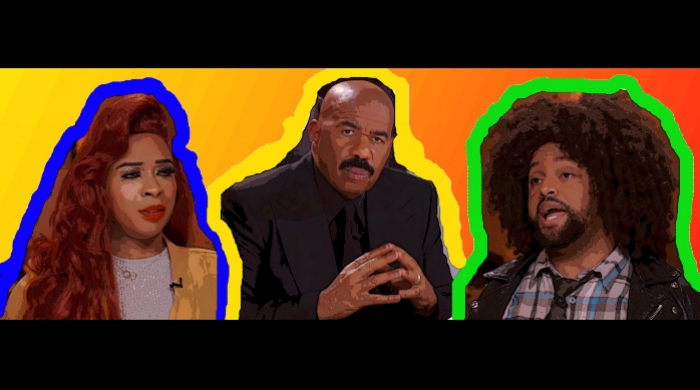 On episode 7 (A Sprinkle of Shady) of “Judge Steve Harvey,” the award-winning entertainer, filmmaker / model-influencer, and musical artist Tyrone Evans Clark who is also known as Tyy Renaissance (stylized as Tyy Renaiⓢⓢance or Tyy Renai$$ance) has a small-claim case with transgender musical artist Sunkee Angel. Sunkee claims that Tyrone stole her glass/mirror mohawk and damaged her expansive glass cutter machine.

“Bye Felicia, I didn’t take Sunkee’s mohawk,” Tyrone screamed at Steve during the trial, referencing the Friday movie character Felicia, a slang way of dismissing someone. “She is trifling and I have no reason to take her stuff! Bye Felicia and bye Simon.”

This episode also shows off a funny video that Tyrone presents to Judge Steve as evidence to back-up his claims against Sunkee. “You are a dang fool and you look even more guilty,” said Steve while chuckling in front of Tyrone.

“He knows he took my stuff — over there looking like a walking palm tree,” shouted Sunkee. “I really thought we were friends and I don’t open up to everyone! I’m not trying to fight, but oh he knows how to take you there.”

“Well you know my grandfather was a boxer and I don’t want no Jerry Springer in here,” said Tyrone.

After the judge’s ruling Sunkee was awarded $8,000. Sunkee was satisfied with Steve's decision, but Tyrone on the other hand wasn’t okay with it.

It’s unfortunate that Sunkee and Tyrone’s friendship ended over this court case because Tyrone was previously in one of Sunkee’s short films “Emotions of 2020” that was released to the public in 2021 on Think Shorts movie platform and INRAGE Entertainment platform. “Emotions of 2020” was created, written and directed by Sunkee. In the short, she explores the religious trauma that followed her from Montgomery, Alabama to Los Angeles where her emotions came to its peak during the very chaotic year. In this film Tyrone plays as himself with the co-star Jonaya Peterson who is known as a model and actress.

Tyrone, who is currently a CEO and creative of TYRONE EVANS CLARK Incorporation Inc. His cartoon animated music video ''Gotta Get Some Tissue '' became an official selection for the 2021 Prague Independent Film Festival and the 2021 Animaze Montreal International Film Festival. “Keep The Bugs Out Of My Soup”, another cartoon animation masterpiece produced, directed, and starring Tyrone, also won the title Honorable Mention at the Gold Star Movie Awards for Best Animation Film and was a Semi-Finalist at the 2022 Montreal Independent Film Festival for Best Animation.

So we know Tyrone Evans Clark isn’t a true nut job, but he is funny as hell.

It's obvious this reality show has some acting involved when it comes down to the plaintiffs, defendants, and few of the disputes but we don’t care because it's hilarious!

This television series was produced by Den of Thieves in association with the amazing Disney Branded Television.

Judge Steve Harvey is filmed in the beautiful lands of Fayetteville, Georgia. Thus making this another incredible ATL production.

Steve Harvey’s court show joins the lineup of other series by ABC (and also featured on Hulu), including Promised Land, Abbott Elementary, The Bachelor, Grown-ish, and Grey’s Anatomy. This television network is also the home for Station 19 which is a spin-off of Grey’s Anatomy.

Tune in on ABC and Hulu for “Judge Steve Harvey”!