Speaking on his new release, Khamari shares: "Drifting is about escapism. I was trying to find a different way to express that headspace I was in, a way away from monotony and overwhelming emotion. Originally we started from the piano and the drums, but I wanted to elevate it. I chopped the intro to Nina Simone’s ‘Feeling Good’ over the track. To me, the irony in sampling a song about a woman singing about how she’s found euphoria, over a song about my struggle of being locked into a search for it, was a dope way to tell that story.”

Khamari grew up in the Dorchester neighborhood of Boston, MA. His artistry wraps his powerfully earnest songwriting around contemporary sonics. Skilled as a vocalist and musician, Khamari's music is distilled from influences ranging as wide as The Beatles, Stevie Wonder, and Sly Stone, to Frank Ocean, Kid Cudi, and Mac Miller. After releasing his debut EP Elderado 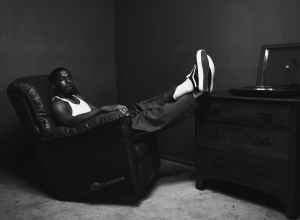 to a warm critical reception, Khamari seemingly disappeared for over a year. His heart breaking single Doctor TO My Eyes - released a full year after his debut EP, and followed by another year-long hiatus - bridged the gap between eras, as Khamari now prepares for his next exciting chapter.

Khamari's career debuted with a trio of Spotify New Music Friday placements, including a #10 spot with his sophomore single release The Heat His editorial support rounded out as the cover artist for Spotify's Fresh Finds, and further playlisting on Apple Music FEELS, Amazon's The New Black and Breakthrough R&B, and as cover artist for Tidal's Pop: Rising. With over 10 million cumulative streams in his first 3 songs - including 500k in “The Heat” first week on Spotify alone - Khamari now begins his next exciting chapter.

His next step is to continue the hunt for the intersection of timeless musicality and contemporary style, all without losing the honest accessibility which made him relatable from the start. Check out “Drifting” and stay tuned for more music from Khamari coming soon.