M.I.A.'s tour ride includes ''three female extras for each show'' who must be aged between 20 and 25 and ''wearing full covered burkas''. 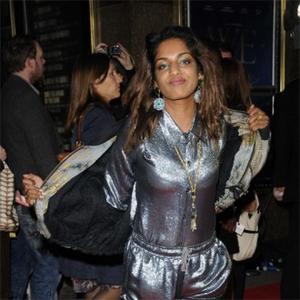 The 'Paper Planes' hitmaker's bizarre backstage request demanded each of the girls must be "between 20 and 25 years old" and they need to have "stage presence and groove to the music on stage for the full duration of the show" on her 2011 tour.

As well as the dancing ladies, the rapper - who caused controversy at the Super Bowl last Sunday (05.02.12) when she flipped her middle finger at the camera while performing alongside Madonna - also requests mixed nuts and cheese, and a bottle of high-alcohol drink absinthe.

She also makes an attempt at being healthy by asking to be provided with dried mangoes, organic dried blueberries and a bucket of "clean" ice.

M.I.A. is not the only rapper to make bizarre backstage demands as Nicki Minaj asks for three buckets of spicy fried chicken - which must have "no thighs and lots of wings" - and contact lense solution on her rider, as well as two dozen Pink or white roses and scented candles.

Mariah Carey has previously requested bendy straws on her rider, while Duran Duran once asked for rare French cheese.