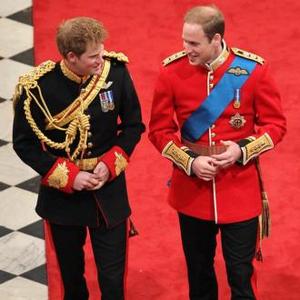 Britain's Princes William and Harry cracked ''bad jokes'' to settle their nerves at the Royal Wedding.

Harry was best man at his brother's nuptials to Duchess Catherine - previously Kate Middleton - in April 2011 and the siblings admitted they were terrified that something would go wrong in front of a live TV audience of two billion.

Speaking on ABC News special, 'The Jubilee Queen With Katie Couric', William said: ''It was one of those days where you feel very elated. Also completely terrified I have to be honest. The prospect of two billion people watching was quite daunting. I steadied myself with my brother. We were cracking some very bad jokes behind the altar before we were ready to come out, to settle the nerves.

Harry added: ''I was massively nervous, everybody was nervous. The whole thing was a bit of a Blur to be honest. At the end of the day it was all of us up there on the altar and anything could have gone wrong.

''I wasn't worried about losing the rings but I was worried I wouldn't be able to get them out at the right time. There were no pockets in my uniform so I kept them in the cuff of my sleeve.''

However, William admitted it wasn't all jokes as he and Catherine take marriage ''very seriously''.

He said: ''It was very important to both Catherine and I that we had a day that was true to ourselves because at the end of the day you're getting married which I take very seriously as does she.''