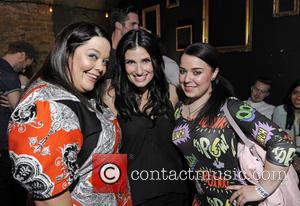 A failed audition for Disney movie Tangled that a casting director taped on her iPhone helped singer Idina Menzel land a leading role in the movie studio's latest animated treat.

Menzel tried out for a leading role in the 2010 fairytale film by performing an acoustic version of Blackbird by the Beatles.

She didn't get the part - but a casting director was such a fan she secretly recorded the performance and then used it to persuade film bosses that the Rent star was the perfect choice for the role of Elsa in new movie Frozen.

Menzel tells Wenn, "I had auditioned for Tangled and I kind of fell between the cracks. The casting director had saved my audition on her phone but I didn't know she recorded it. She's sort of a fan and she was always waiting for the right thing."

The singer/actress admits she was shocked when she got the call out of blue and was asked to team up with Kristen Bell for the new Disney project.

She adds, "They didn't have any music written yet but they wanted to hear us sing together, so we learned The Wind Beneath My Wings. We sat at my piano in my house in California and figured out harmonies."