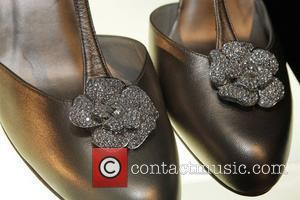 Picture: CODY TO WEAR MILLION DOLLAR SHOE TO THE OSCARS Oscar-nominee DIABLO CODY will look like a million dollars when she steps out on the red...

Former GUNS N' ROSES guitarist Slash has defended his decision to recruit Fergie to sing on a remake of the rock band's PARADISE CITY, insisting critics of the Black Eyed Peas star will be blown away by her vocals.
The iconic axeman is working on his as-yet-untitled solo album and has lined up a string of stars including Ozzy Osbourne, M. Shadows and Cypress Hill to collaborate with him.
Fergie has taken the lead vocals on the 1988 track and Slash is adamant the results will be well-received.
In a post on his Twitter.com page, Slash writes, "Until now, not too many people have heard Fergie sing rock & roll but she sings it better than most dudes I know.
"She's a screamer at heart."
Slash recently swapped rock for R&B when he hit the studio with Rihanna to record Rockstar 101, a track featured on the Bajan beauty's upcoming album Rated R.
The guitarist's disc is scheduled for release next year (10).