Slayer are ''devastated'' after the passing of guitarist Jeff Hanneman, who succumbed to liver failure two years after contracting a degenerative flesh-eating disease. 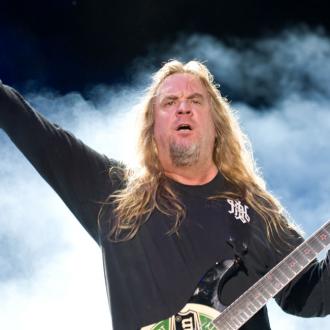 The heavy metal rocker succumbed to liver failure in a Californian hospital on Thursday (02.05.13), two years after contracting a rare skin disease, leaving his bandmates ''devastated''.

Jeff - who formed the band in 1981 - fell seriously ill with necrotising fasciitis, a degenerative flesh-eating disease, after being bitten by a spider in early 2011.

He underwent several operations to remove the dying tissue from his arm before announcing he was cured in 2012, so it is as yet unclear whether the liver failure was connected to his illness.

His band mates posted a message on Facebook, reading: ''Slayer is devastated to inform that their bandmate and brother, Jeff Hanneman, passed away at about 11am this morning near his Southern California home.

''Hanneman was in an area hospital when he suffered liver failure. He is survived by his wife Kathy, his sister Kathy and his brothers Michael and Larry, and will be sorely missed.''

The thrash pioneers hadn't recorded an album since 2009, but were confident they would return to the studio once Jeff had recovered from his ordeal.

After enduring several skin grafts on his arm, the rocker had recently been working on physical rehabilitation and playing guitar again.

The 'Raining Blood' hitmakers are considered one of the 'Big Four' heavy metal bands, alongside Metallica, MEGADETH and Anthrax.

Heartfelt tributes to the star have come flooding in on Twitter, with former GUNS N' ROSES guitarist Slash posting: ''Tragic & shocking news about Jeff Hanneman. He is going to missed by so many. What a sad day for Metal. RIP man. (sic)''

Fall Out Boy's Pete Wentz wrote:''Rest in peace Jeff Hanneman. Decade of aggression is the first cd I ever bought with my own money. Sad day. (sic)''