Eight bands on one stage in one day, what a way to welcome back live music!

Live music returned to Dreamland in Margate in spectacular fashion as Sports Team brought their Bus Trip All-Dayer back to the seaside town for the third time. At the end of a week where, finally, social distancing restrictions had been lifted, Sports Team curated a full day of music on The Scenic Stage in the grounds of the heritage theme park. Aside the oldest wooden roller coaster in the UK, Alex Rice and his band invited seven other acts to join them on stage for their infamous Bus Trip All-Dayer. 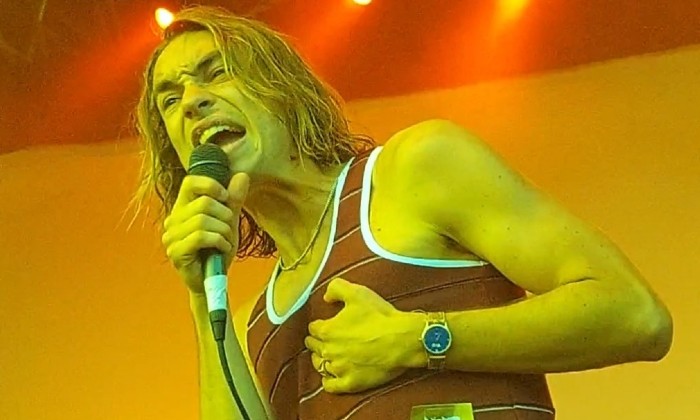 The skies were looking a little moody at times but the weather behaved and in the end the sun shone on a day that saw fans of live music welcomed back to Dreamland in large numbers. There had been some previous, socially distanced, events held here but Sports Team were lucky enough to host Dreamland's first unrestricted gig since the PM confirmed that Freedom Day would go ahead as planned.

Due to demand Sports Team had shifted the location of their All-Dayer from the 160 capacity basement of Elsewhere, a few hundred metres away, to the much larger Scenic Stage arena. With their ever growing popularity, and now legendary live performances, Sports Team more than justified their appearance at a venue that in recent years has played host to Gorillaz, Foals, Happy Mondays, MARINA and many others. The decision to swap venues was an inspired one, not only because they could play to a much larger audience but also because they could include so many more people in a celebration of live music.

As the day began to unfold there was a mixture of excitement and just a little anxiety. There was no social distancing required for the first time in 16 months, masks were not mandatory and you were free to mix with anyone! Weird? It didn't take long at all for the gathering crowds to embrace the moment, appreciate their freedom and enjoy a cracking day. The bar was kept busy, the Rad Burger's were flipping and the fish was frying as the first of the day's acts took to the stage. Just a stones throw from the beach (If you've got an Olympic arm) Bull got things underway with some summer scented tunes.

It was a rather low-key start to proceedings given the fact that this was quite a big day, not only for the bands but also for those that had come to see them. Bull took to the stage, played one song for two minutes - which sparked spontaneous applause, and then stopped abruptly and said, "That was the sound check!" They kicked off their set proper with Shiny Bowl as cries of "We love you Bull" were heard emanating from the crowd. The succinct set had a very R.E.M. harmonic air about it as Bull played Bedroom Floor, Serious Baby and their biggest song to date, Green; a song that saw the use of a green trumpet to embellish the sound. Bull also played "two super new ones" including one called Weston-Super-Mare - "the new Ramsgate" according to lead singer Tom Beer.

Next up onto The Scenic Stage was Margate resident Jalen NGonda. NGonda said, "I'm gonna play you some soul music" and that's just what he did. Jalen and his guitar were all that was required to keep the onlookers happy as he sang his melodic R&B flavoured songs. The combination of Jalen's emotive falsetto vocals and his skilful guitar playing held the crowd. NGonda confessed that "it feels strange to be gigging again, but I bet you've heard that from all the bands?" He added, "must be good for you to just shake your ass though" before giving a stirring performance of Marvin Gaye's Just To Keep You Satisfied.

The second York band of the day followed Jalen NGonda's performance as the sun burst through the clouds. English Teacher, playing only their second gig ever, were a breezy breathe of fresh air - and who doesn't want to hear songs like The World's Biggest Paving Slab? Lead singer Lily Fontaine was thoroughly captivating throughout the band's set as she treated the growing crowd to - "this is where it gets weird" - poetry, as well as songs including a brilliant rendition of their April single, R&B. (Definitely a band on the up-and-up)

Eager to see more of the crowd on their feet, and to get the adrenalin pumping, were Liverpool's Courting. Sean Murphy-O’Neill seemed to have more pent up energy in him than almost anybody else on planet Thanet mid way through Friday afternoon. He stalked the stage like a man possessed waiting for just the right moment to launch himself into his performance. It was well worth the wait as Courting tore through their greatest hits, including the introductory trio of Football, Grand National and Popshop! before playing newer tracks Tennis and Loaded. Bull, and other ensemble cast members, joined Courting on stage to sign off their impassioned set with an extended, and somewhat chaotic version, of old favourite Slow Burner.

Lingerie, leotards, sports wear, DM's and arm belts followed Courting as London's deep tan took to the stage to play their alternative Post-Punk compositions. After the excitement and energy of Courting, dark tan at least gave the audience a chance to regroup and refresh. They opened with Constant Inconsistencies and deepfake followed by "sesh anthem" camelot and 'do you ever ascend' from the trio's new EP creeping speedwells. Bassist Celeste strutted the stage with menacing intent as Wafah plucked her guitar and Lucy kept a tight rhythm at the back. There were a few hiccups, and the odd false start but no one cared, it just added to the enjoyment of seeing real live music again.

Sub Pop signing TV Priest saw to it that the level of intensity didn't drop for too long as they began their seven track set. Frontman, and lead singer, Charlie Drinkwater was on fine form as he went from Runner Up to House Of York in suitably snarly fashion. Four of the seven tracks were lifted from the band's debut album 'Uppers', with the opening track The Big Curve, and their most streamed track, Press Gang, being the early evening highlights (although Decoration never fails to deliver a wry smile - "I've never seen a dog do what that dog does"). For a relatively young band with little live experience, TV Priest looked liked seasoned veterans rather than fresh faces. The performance was as "tight as a tourniquet" and as compelling as any previous performance that day.

Los Bitchos were the penultimate act of the day playing a largely instrumental set that had to be cut short by one track due to timings running over and a curfew kicking in at 10pm. It became clear quite early on why Los Bitchos are such a firm favourite of BBC6Music's Marc Riley as they quickly engaged with the audience and showcased their deft musicianship. Serra Petale's incredible guitar work was a revelation and Nic Crawshaw's drumming a percussive delight. Stepping in to the fray at the last minute, stand-in guitarist Charles Prest, made a fabulous honorary Bitchos as the band played, amongst others, a spirited version of The Link Is About To Die, a song inspired by "candid sexuality" novel Tropic Of Cancer aptly called Tropico and closed out with a joyous Lindsay Lohan. 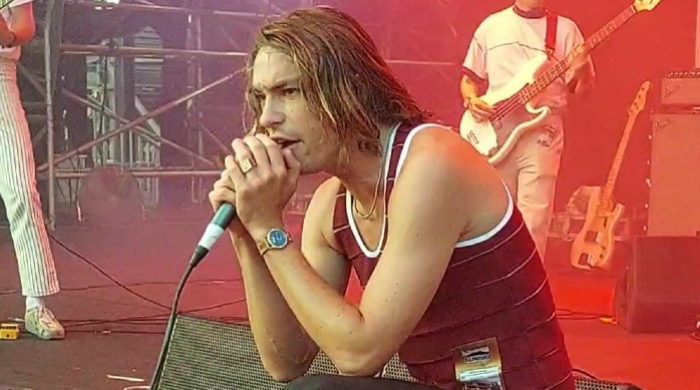 Sports Team topped the bill and played out the night like the headliners they were destined to be. Alex Rice has such a commanding presence on stage it is difficult, almost nigh on impossible, to take your eyes off him. His constant restless movement, limbo dancing and frequent "moves like Jagger" all make for irresistible and compelling viewing. Rice bounced onto The Scenic stage like Tigger on speed as Sports Team delivered an explosive version of Here It Comes Again to begin their set.

Sports Team left nothing behind as they gave an inspired performance of Fishing, the Goldsmiths clique critical Camel Crew and a blistering version of Here's The Thing. Whilst Alex, Henry, Al, Oli, Rob and Ben gave it their all on stage the crowd below them gave it their all off stage as they enjoyed their first uninhibited mosh-pit of 2021. The collective joy and the shared experience made Sports Team's Bus Trip All-Dayer an event that will be remembered for a life time.

Sports Team were magnificent on Friday night, sealing a day of great music with a spectacular performance of their own, finished in real style with their first ever single, Stanton. From the opening bars to final farewell the crowd were hooked by the incendiary performance that Sports Team delivered.

Rice jumped off stage on numerous occasions to get closer to the over excited audience below him. As he stood atop the barrier singing M5 the realisation of what's been missing for the last 16 months really hit home. The collective experience of hundreds of people enjoying a truly breathtaking performance was magical. Alex said at one point, "here we are all living in Margate, I don't know whether we've won or not". We had, we all most certainly had.