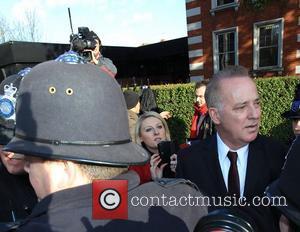 Picture: Barrymore fined for drug possession Fallen British entertainer {MICHAEL BARRYMORE} has been fined more than $1,200 (£750) for possessing cocaine. The funnyman, who has battled...

Three new films labored even to come in at the low end of estimates for the Labor Day weekend. The first three days of the holiday saw Lionsgate's horror flick The Possession debut in first place with an estimated $17.7 million -- well below the $20-25 million that forecasters thought it would earn (although ticket sales are expected to rise to about $21.3 million through Monday). The Weinstein Co.'s Lawless earned only about $9.6 million, slightly below its predicted take of $10-15 million. It should add another $2.4 million on Monday, box office pundits say. As for Oogieloves in the Big Balloon Adventure -- it was supposed to set a record for an all-time box-office low, and it appears to have succeeded. The film earned around $407,000, despite playing on 2,160 screens. In many theaters, seats were presumably empty, and owners could simply have turned off The Lights and projectors and thereby lowered their electric bills. Also disappointing was the take for the anti-Obama documentary 2016 Obama's America , which had been expected to receive a lift from the Republican National Convention. It will wind up with about $5.3 million over the three-day weekend and around $7.2 million over the four-day holiday. Still -- not bad for a documentary.