Variations On An Inexhaustible Theme By Massimo Magee

Variations on an Inexhaustible Theme by writer, artist and musician Massimo Magee demonstrates a creative genius rarely seen in the modern literary world, pushing the boundaries of the multimedia experience in a time-hopping exploration of the nature of art. 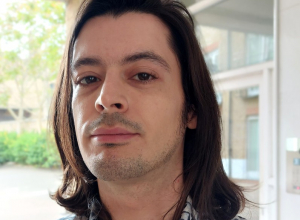 If you are familiar with avant-garde music, you may well be aware of composer and performer Massimo Magee.

Signed to New York-based 577 Records, the London-based musician has been at the forefront of experimental music for more than a decade, largely in the forms of free jazz and electronics, and has performed internationally, both on his own and as part of ensembles such as Interrogation Quartet, the Irving/Magee Duo, Cyclone Trio, and Apocalypse Jazz Unit.

That said, you can’t put Magee in a pigeonhole, and that applies as much to the art forms he is involved with as much as the genres he explores. As well as being a highly accomplished musician, he is also an avant-garde artist who has crafted many celebrated audio-visual digital art pieces, and also an author.

It is in to this latter field that this review pertains, though to describe Magee’s Variations on an Inexhaustible Theme as a ‘book’ is really too limiting; better to say it is a multi-media art project on the printed page.

Variations is a one-of-a-kind novel bursting with creative genius, combining profound experimentation in text, music and art to make something far greater than the whole.

The author’s ambitious aim is, put as simply as possible, to explore the true meaning of art by uncovering the ideas of the past and then following these as they grow in power and influence to their eventual outcomes.

With art subjugated to the realms of politics and economics, the author believes we are rapidly approaching an environmentally ruined world scarred to the point of destruction by greed.

An experimental work in modernist form, the narrative hops around in time as it introduces us to characters, some historical such as artist William Blake, others entirely fictional, debating the meaning of art in their frames of understanding.

These notions then evolve and, in tandem, the world is transformed—like a combination of symposium and senate.

If the first half of Variations could, roughly, be said to concern the origins of art philosophy, then the second half can be described as the outcomes, as mankind ventures off Earth and begins the colonisation of other worlds, perhaps built to a more utopian model.

These characters, who range from artists and occultists in the 18th century, the Age of Enlightenment, to space-faring colonists, give voice through debate to some of the key social and political idea that have driven civilisation forward.

At the same time, such questions as whether capitalism kills art, and what is the relationship between the dominance of rationalism and the suffocation of art and spirituality, are raised.

If the work could be said to have a ‘story’ in the standard sense then you would be forgiven for thinking it one with a bleak trajectory.

That is one possible interpretation but I see the message as fundamentally positive, advocating that we go back to the (historical) source of the problem to find constructive answers.

In this sense, it suggests an avant-garde, neo-Modernist approach to life: creating the human world anew. 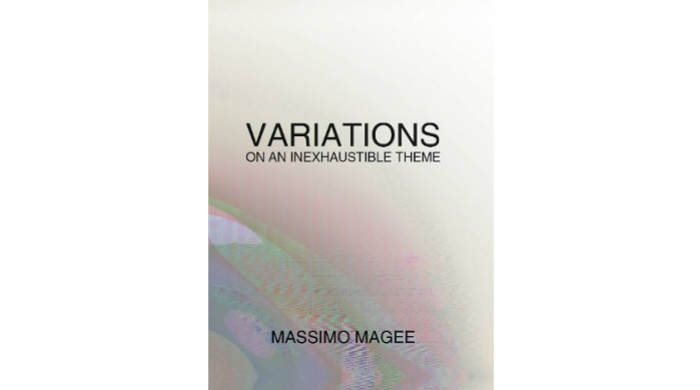 Variations on an Inexhaustible Theme by Massimo Magee uses music and art in combination with text to utterly immerse readers in the book.

Like avant-garde music, those unaccustomed to experimental writing may not know how to approach Variations at first.

But I would urge readers to stay and immerse themselves in the experience, relying not on traditional understanding but instead on ‘anagogy’—more a method of indirect spiritual interpretation.

Given its nature, Variations invites this approach, combining as it does text with art and music into a fantastically rich multi-media journey.

As you progress through the book you will spot QR codes for specific passages, which when read via a smartphone or other digital device will play a musical track composed and performed by the author.

Some are short, others spanning more than 10 minutes, and each enhancing the sensation and feeling of the story at that particular point.

There are 122 accompanying tracks in total, which would comprise around four CDs’ worth, and while you couldn’t say they form a coherent soundtrack to the work as a whole, they are accomplished, absorbing avant-garde jazz pieces mixed with some more deliberately jarring noise rock that suit and set the mood perfectly.

Not for one second can you ‘read’ Variations as a passive bystander; you are immersed in it, interpreting it as you respond to the various stimuli. By doing so, you’ll come to your own realisations and conclusions, just as you would with a multi-media installation.

William Blake—the visionary 18th century English poet, painter, and printmaker (a prototype of today’s multimedia artist)—serves as a constant companion in the book’s first half.

Described by one character as “one of the new students at the Academy and a young man of the most singular temperament … having the most fanciful visions,” he is our guide, expressing how he wants all arts to be conjoined in his imagined paradise. This, in effect, mirrors the author’s position.

In the second half, we see the outcomes of the ideas discussed earlier as we are faced with the unpleasant realities of today’s climatic and social collapse, and our potential off-planet continuation.

Variations on an Inexhaustible Theme is highly political, as well as being artistic and spiritual, with parallels to the writing of such luminaries as Alan Moore (Jerusalem), Neil Gaiman (Sandman), Umberto Eco (Foucault’s Pendulum) and Thomas Pynchon (Gravity’s Rainbow).

It constantly pushes the boundaries of art and creates a first-of-its kind multimedia literary experience that will elicit a deep emotional response that stays with you long after you’ve finished the book.

The book follows, and builds upon, Magee’s 2017 Manifesto (New Unities)—which sets out his audio-visual digital art practice—and the limited-edition multimedia novel The Triptych.

Taking the history of ideas as his playground, and a 21st century multi-sensory approach to their exploration, the author’s Variations on an Inexhaustible Theme is note-perfect fiction for music fans with an adventurous ear.

Variations on an Inexhaustible Theme by Massimo Magee is out now through Eleusinian Press Limited in hardcover priced £39.99.