Universal chairman Adam Fogelson has announced that a movie adaptation of hit Broadway musical 'Wicked' is expected to be made 'sooner rather than later'. 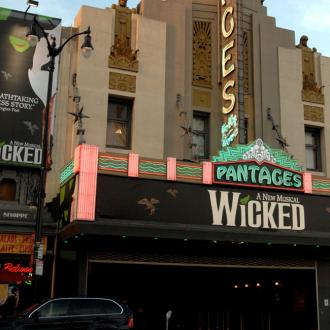 'Wicked' will hit the big screen ''sooner rather than later''.

Universal Pictures chairman Adam Fogelson has insisted a film adaptation of the hit Broadway musical - which is also owned by the film studio - is still in the works and a top priority for the company.

He told The Hollywood Reporter: '''Wicked' has been an enormous win for this company. The way it works, we should be in agreement together on when the right time to do this is.

''But I will tell you I believe that we are collectively moving toward 'Wicked' coming to the screen sooner rather than later.''

The 'Wicked' musical - which is based on Gregory Maguire's novel, 'Wicked: The Life and Times of the Wicked Witch of the West' and serves as a prequel to 'The Wizard of Oz' - has entertained fans for nearly 10 years on Broadway in the US and in London's West End in Britain.

The colourful production tells the tale of the unlikely friendship between Glinda, the Good Witch of the North, and Elphaba, the Wicked Witch of the West.

While 'Wicked' awaits the big screen treatment, the fantasy world of Oz - which was most famously captured in 1939's 'The Wizard of Oz' starring Judy Garland - will next be seen on film in Disney's 'Oz the Great and Powerful' which will be released in March. That film stars James Franco, Rachel Weisz, Michelle Williams and Mila Kunis.