One Direction hunk Niall Horan has bought a new house in Los Angeles and has already befriended new neighbours Kylie and Kendall Jenner, who are keen for him to appear on their family reality show. 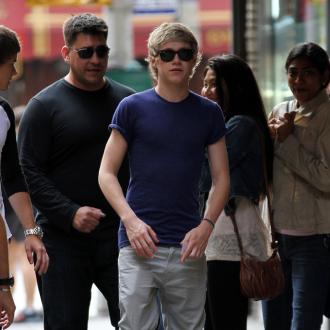 Niall Horan has bought a house in Los Angeles.

The One Direction hunk has splashed out $1.5 million on a new home in a luxury gated complex, and his new American home boasts a swimming pool and games room - but builders refused the 19-year-old pop star's request for a bar because he is under the legal drinking age in the US.

A source said: ''The guarded community where Niall lives when he's in LA is a good investment - and it's packed with celebrity neighbours.

''As well as the Kardashians, other residents include Ozzy and Sharon Osbourne and Jennifer Lopez.

''Niall wanted a permanent place in the States because One Direction will be spending a lot more time there this year and he didn't want to stay in a string of hotels.''

And the house could even spark a new career move for the 'Little Things' singer.

He has befriended his young new neighbours, Kendall and Kylie Jenner - the daughters of Kris and Bruce Jenner - and the teenage sisters are keen for him to appear on their family reality TV show 'Keeping Up With the Kardashians'.

The source added to The Sun on Sunday newspaper: ''He's made friends already with his Kardashian neighbours and the younger Kardashian sisters love him and his Irish accent. They're already talking about getting him on the family's reality shows and they think he's sure to say yes because he would find it funny.''