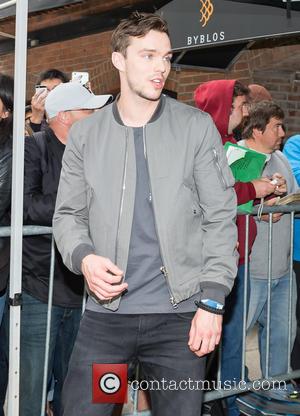 Nicholas plays Steven Stelfox in the movie, which follows the businessman as he slashes his way through the music industry to secure his career.

It's branded a dark comedy, a genre the 25-year-old certainly took in his stride during shooting.

"I really enjoyed it," Nicholas laughed to Total Film magazine when asked if he felt bad having to "batter" James' character Waters. "I think he's so funny in the film, I love it. All the performances, particularly when you read the book (by John Niven) - it's brilliant to then see this talented British cast bring them to life."

It marks a change of role for Nicholas, who began his career as troubled teenager Marcus in 2002 movie About a Boy. Having played everything from a mutant in the X-Men franchise to a sensitive college student in A Single Man, the star embraced this dark part.

"With any film character, it's always nice just to keep it mixed up and play different things," he explained. "I've always tried to do different things because I just don't think there's any point in repeating yourself. It also keeps you fresh when you're learning and trying new things."

One scene in Kill Your Friends sees the handsome Brit in Speedos, although he insists he wasn't fazed by the tight swimwear. When the interviewer mentioned Daniel Craig wearing the small bottoms as James Bond, Nicholas didn't necessarily dismiss the idea of playing the spy in the future.