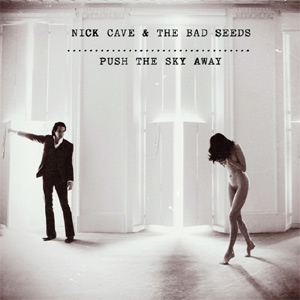 'Push The Sky Away' represents the 15th studio album from Nick Cave & The Bad Seeds, a quite remarkable achievement for a group now in their 30th year, let alone when you consider the plethora of peripheral undertakings that its eponymous frontman has committed to over the years.

Among the chattering masses, 'Push The Sky Away' has more than many other of their previous albums seemingly divided opinion. The sycophantic hero worshippers loved it before they even heard a note and the tantalising teaser trailer merely sent them into hyperdrive, whilst the (largely) grumpy old men, who in their youth once adored him, have failed to 'grow' and develop at the same pace and so have long since missed the point. Their journey ended when they lost the appreciation of the fluidity and evolutionary processes that drive an incredibly creative and artistic talent like Cave's."The man lost it after Henry's Dream. The younger Nick Cave would have despised this stuff" is a typical comment from some of the detractors but it is both inaccurate and incredibly illusory to suggest such opinions; I don't think Nick Cave, then or now, lives having many regrets and in each of his ages he would clearly have seen the worth of his work.
What is probably most striking about the new album, and why it may have caused a stir among some of his older fans, is the overall feel of restraint and reserve. This is not the full frontal 'porn' of The Birthday Party, it is rather more like seminal eroticism and is as such more closely and easily associated with the band's dual album releases of 'Abattoir Blues' and 'The Lyre Of Orpheus' rather than his previous Grinderman-tainted Bad Seeds album 'Dig Lazarus Dig!!!'. Knowing when to stop and what to leave out, when adding more will lessen the quality and having the strength of character to just cut away the surplus is most definitely driven by the ever uncompromising Cave and here it has clearly paid dividends.

'Push The Sky Away' has a delicacy and tenderness woven through it like a fine silken tapestry of beguiling beauty but it can still be unflinching and brutal. Cave has not lost the power to tear at your heart strings before ripping out your innards and strangulating your circulation with jaw dropping imagery, literary sparkle and poetic flamboyance. Cave's prowess at imparting a compelling and often disturbing tale are second to none and there are lyrical gems aplenty here.
The first single taken from the album 'Jubilee Street' is one of the more immediate among the nine track set and serves as a fabulous introduction to the band's latest work. The aching of the strings and the tremendous build of the tumultuous finale are matched only by the utterly brilliant lyrics..."I got love in my tummy and a tiny little pain, And a ten ton catastrophe on a 60 pound chain." 'At The Water's Edge' is a gripping tale of promiscuous city girls "their legs, wide to the World, like bibles open" given extra gravitas by the menacing and unnerving periodic injections of tempered mania provided by Warren Ellis. Here more than anywhere else on the album you can clearly hear the influence provided by the soundtrack scores that Cave & Ellis have partnered on in recent years. The sense of foreboding continues on the Wikipedia inspired 'We Real Cool' and Nick shows he's not lost any of his often provocative wit on the beautifully melodic fragility of 'Mermaids'.

Cave's ability to convey in such a limited time frame what others may take an essay to complete is no more finely captured than on The Bad Seeds latest single, 'Wide Lovely Eyes'. His voice now slightly mellowed with a depth of soulful expression wraps around each word with a caring caress. The metronomic and mesmerising arrangement is a triumph of subtlety and sensitivity.."I watch your hands like butterflies landing" Cave sings in his most emotive tones since 'The Boatman's Call'. Latterly, Nick Cave & The Bad Seeds treat us to a real tour-de-force with the indulgence of the heavier, more percussive 'Higgs Boson Blues' where even Hannah Montana plays a cameo role and (As with Jubilee Street) there are some understated backing vocals provided by Children Of The Ecole St Martin. The title track closes out the terrific album with some sweeping organ notes and a booming bass line provided by Barry Adamson set to the intertwined vocal arrangement.

'Push The Sky Away' may have seen a slight shift in Cave's focus as far as inspiration for his material is concerned but it by no means represents a diminishing return from his song writing. Far from being merely content, you are constantly reminded that he is always striving and questioning, pushing harder and for more. His writing is both simultaneously uplifting and often tragic, expressing a mind in constant flux and turmoil providing you with glimpses of beauty and torment. His single, often bloody, mindedness, has seen the band change radically over the years but we should all be thankful that the helmsman, the ever present Cave, has steered his ship with a drive and passion that are unquestionably honest and true.

There are only a handful of artists that have sustained this kind of prolific output and consistency throughout their career and Push The Sky Away (His "ghost baby in the incubator") would give you no reason to think that this will not carry on for some time to come...., hallelujah!