The break-up of The Birthday Party may have been an acrimonious and messy affair but it wasn't long before Nick Cave was back in the studio with a new group and a new vision for the future. When the infamous Birthday Party, Cave's previous group, played their last gig on June 9th 1983 in Melbourne, Australia, they unwittingly gave rise to one of the most influential and inspirational groups of the last 40 years. From the ashes and the anger of The Birthday Party rose Nick Cave & The Bad Seeds and their first full length record, From Her To Eternity. 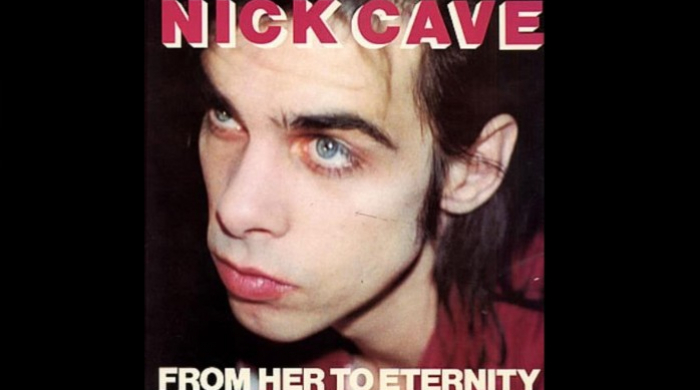 Recorded in the fall of 1983 and the spring of 1984, From Her To Eternity was the platform from which Cave, and his steadily changing set of band mates, would build on. To date Nick, and various members of The Bad Seeds, have delivered 17 more albums, forming a back catalogue like no other. From Her To Eternity was the opening chapter to a great body of work that has a consistency of quality, and a depth character, beyond comparison to all but a few artists, dead or alive.

In late 1982 and early 1983 Nick Cave had his creative differences with some members of The Birthday Party, particularly guitarist Rowland S. Howard, but he didn't exactly go it alone when his new group emerged. Cave was joined initially by previous band mates Mick Harvey and Barry Adamson, formally of Magazine, as well as new recruit Blixa Bargeld of Einstürzende Neubauten. The Bad Seeds line-up also included Cave's then girlfriend Anita lane and multi-instrumentalist Hugo Race. Lane, who sadly died at the age of 61 on April 27th this year, was also credited as joint lyricist, together with Cave, on the album's title track.

Nick Cave & The Bad Seeds first album comprised of only seven tracks but all of them made an immediate and arresting impact on the listener. Cave had lost none of his ability to channel is inner demons when it came to delivering the songs on From Her To Eternity. There was still pent up anger, rage, torment and an undeniable visceral rawness to the work.

The album's opening track, Avalanche, is a near perfect song to introduce you to what is to come and prepare you, if such a thing is possible, for the aural onslaught that is about to unfold. The slowly building song barely contains Cave's emotional outpourings as he sings tethered to the mic. He takes Leonard Cohen's story telling to another level with a performance that not only captures the essence of the original song but also interprets it in Cave's own inimitable way. Nick Cave doesn't just sing Cohen's song, he performs it like an actor making the role his own. Aside from the lyrics there is little else that ties both of these versions together, they are so markedly different. It is not just Cave that helps bring this about, the soundtrack is equally dramatic and eventful. The cinematic and theatrical effects create such an atmosphere that when paired with Cave's vocal you cannot help but be slightly intimidated or frightened. (It's like Bela Lugosi's Dead on satanic steroids).

Cabin Fever, a song written by Cave and Bargeld, is no less dark and is certainly no less compromising in it's demeanour or approach. Cave sounds almost demented at times as he repeatedly sings the song's title. You can also hear the immediate influence of Blixa in the semi-industrial soundtrack that plays out below Cave's increasingly menacing vocal. Well Of Misery, the third track, is just as challenging but does give the listener a slight respite as a layered vocal harmony is introduced into the mix. The off-beat, and isolated, percussion provides an uncompromising score to a song that brings to the fore an, ever so slightly, more melodic and traditionally sung vocal from Nick Cave.

The final track on side one of the original album is the song that has come to define it in so many ways. From Her To Eternity, a play on the title of the 1951 novel by James Jones, From Here To Eternity, is the album's undoubted high point. This, more than any other track on the album, is where Nick Cave cast off the shackles of The Birthday Party and began to create a whole new era with The Bad Seeds.

From Her To Eternity is the foundation stone that paved the way for Your Funeral...My Trial, Henry's Dream, Murder Ballads, Push The Sky Away, Carnage and so, so much more. The instrumentation laid out on this track is captured brilliantly by producer Flood. The piano arrangement alone is enough to scare you half to death. Sinister doesn't do it justice. If you were left alone in a darkened room with this track on repeat you'd leave it a quivering wreck as your imagination was left to run riot. Cave manages to restrain himself just enough so as not to 'over act' his part in this horrifying song as he sings, "Oh tell me why? Why? Why? Why the ceiling still shakes? Why the fixtures turn to serpents snakes?".

Saint Huck, one of the first tracks recorded for the album, opens up side two with Cave navigating a path between his Birthday Party persona and his want to move on and explore new territory. Nick can be heard using varying vocal styles during Saint Huck whilst all the while managing to maintain an air of menace and barely contained violence. Wings Of Flies, a track that was partially written by Jim Thirlwell, is the briefest of the seven on the album coming in at a mere 4m6s. The brooding bass line and roller-coaster delivery that comes in and out further amplified the sense of terror that pervades the album.

At nearly ten minutes long, the album's close out track, A Box For Black Paul, could rightly be described as an epic. As the ominous notes of the piano play out below, Nick imparts the lyrics with conviction and drama like he's reading a text from some classic gothic novel. "Here is the hammer, that built the scaffold, and built the box… Here is the shovel, that dug the hole, n this ground of rocks… And here is the pile of stones! and for each one planted, God only knows, a blue-rose grown… These are the true Demon-Flowers!!" (And there in a nutshell you have Nick Cave; God, Death, Demons, Roses and metaphors!)

From Her To Eternity by Nick Cave & The Bad Seeds is by no means the ever evolving band's best album, but it is the one that started a journey that is still very much on-going and still delivering moments of pure musical magic to this day. From Her To Eternity captures Nick Cave as he starts to transition from an angry and feral young man into an extraordinary singer-songwriter, brilliant story-teller and latter day icon of modern music.

From Her To Eternity, by Nick Cave & The Bad Seeds was released on June 18th 1984 via Mute Records.