British Actor Nick Frost Tried To Kill Himself When He Was A Teenager. 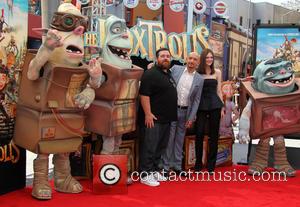 In his upcoming autobiography, the Shaun of the Dead star recalls a dark period in his life when his parents' furniture business collapsed and they lost their family home.

His mother suffered a stroke due to the stress, while his father had a nervous breakdown and "was never the same".

Nick's dad never worked again, and his mum battled alcoholism, driving the actor to attempt to take his own life with pills.

"I was alone in a terrible place with an alcoholic mum and a father broken by failure," he writes in the extract from his memoir, published on Guardian.co.uk.

"I think I probably wanted to be dead at this point. One day I'm very drunk at home in my room. I'd started stealing and squirrelling away Dad's pills, he had so many (pills) he never noticed any missing. I took a handful of pills and washed it down with more booze.

"I write a goodbye to Mum and Dad apologising for what was about to happen and I attempt to lie on my bed (sic). I don't make it... I collapse on the floor. Dead. I'll definitely miss everyone but I'm glad, to be honest.

"I wake up the next morning. B**ls. I'm still alive. My room has literally not been touched. My note has not been found, my Close Encounters album is still revolving on the record player. No one came in. No one lifted me on to my bed or called an ambulance. I feel like s**t."

Nick's mum has since passed away.

His memoir Truths, Half Truths and Little White Lies, is released on 8 October (15).