Nick Grimshaw is having a rough old week! 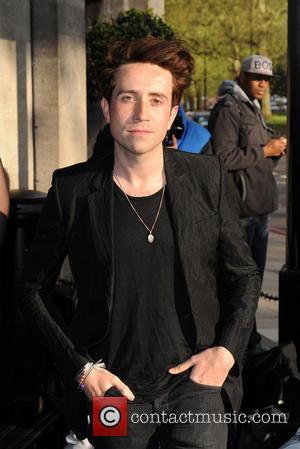 Nick Grimshaw didn't need this. Just days after being on the receiving end of one of Robbie Williams rants at the Sony Awards, the Radio One DJ woke up on Wednesday morning to discover his swanky car had been clamped. The 28-year-old was determined not to let the bad luck get him down and posed happily with his vehicle and a clamping document.

According to the Daily Mail, the cost of the removal of the clamp is £70.00 though Grimshaw has probably also received a parking fine of £80.00. It's probably safe to assume the presenter won't struggle to the pay off the fine, though it's another slice of bad luck in a terrible week for the DJ. On Monday, Robbie Williams fumed to the Sony Awards audience about Radio One's refusal to play his chart topping track Candy last year, singling out Grimshaw for particular scorn. "I did the Brits and started singing, 'Hey-ho, here we go' to a bunch of industry people and they were all just like, "F*** off, you're fat and you're old. And Radio 1 don't play you no more - you're fat and you're old"," adding, "Isn't that right Nick, you b******?"

Despite the rant, Grimshaw appeared to take things in his stride and later told The Sun, "I think he was so funny. I love him and he's really cool. He should have his own radio show. I'd have him on every morning."

Grimshaw is also struggling to maintain ratings on his BBC Three show Sweat: The Small Stuff. Nick Grimshaw Got His Car Clamped This Week