Former 'Hogan Knows Best' reality star Nick Hogan is the first male to be exposed in the nude photo leak. 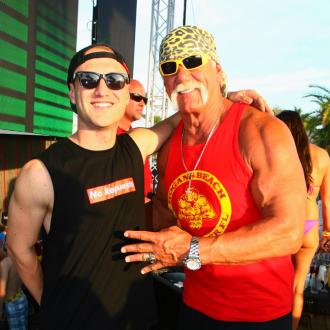 Nick Hogan is the first male to be exposed in the nude photo leak.

The 24-year-old DJ - whose father is wrestling legend Hulk Hogan - has apparently been targetted by hackers in the same way a host of female stars, including Jennifer Lawrence, Rihanna and Kate Upton, had personal photographs stolen from their iCloud accounts and posted online.

A staggering number of Nick's pictures have been hacked and are said to include his high school exploits, and intimate photographs of himself and various girlfriends, and at least one picture showing his penis.

However, according to TMZ, the former reality star - who appeared in the 2005 show 'Hogan Knows Best' - thinks the hackers are now in possession of what is technically child pornography, after passing around photos of Nick and his teenage girlfriends, who would have been underage at the time.

The hackers are also claiming to have taken two photos from Nick's iCloud which show his mother, Linda Hogan wearing a thong whilst bending over in a provocative manner.

The star has denied that these image were on his iCloud, and also insisted the picture supposedly of his penis is a fake.