The celebrity couple, who are already parents to a 22 month-old son, are preparing to welcome a baby girl into their family. 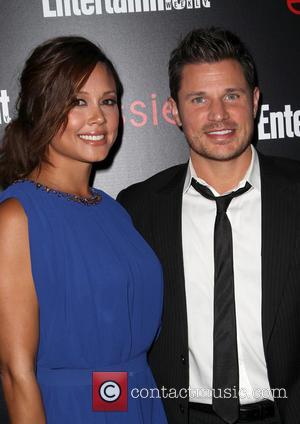 Nick Lachey is going to become a father of two!

The 40 year-old singer and his wife Vanessa Minnillo are expecting their second child together.

"Can't think of a better way to celebrate 3 years of marriage to my beautiful @VanessaLachey than this! #family," he tweeted along with a photo that confirmed, "It's a girl."

The happy couple, who tied the knot in July 2011, are already parents to a 22 month-old son, Camden John Lachey.

Several months after giving birth, Vanessa wasn't shy in expressing her difficulties when dealing with motherhood, which she documented in a lengthy blog post called 'Inside Story: My Experience with Baby Blues.'

"The fear of not knowing what I'm doing. The fear of 'messing up' this little boy. The fear of being responsible for a human being and not knowing any 'life' experiences to compare moments with him to," she wrote about her struggles with being a mother.

Adding, "No matter how many books you read, NOTHING prepares you better than the real thing. I felt lost, unloved, alone and at my wits end."

However, the family of three are much happier now, and Nick even likes the change Vanessa went through when becoming a parent.

"My wife's maternal side is a new dynamic to her personality," Lachey told Parents magazine in June. "It's definitely made her even sexier."

"I knew the man I was going to marry was not only a great man, a good friend, and a family guy, but he was going to respect and treat me well and be an amazing father and role model to our children. That's Nick," Minnillo added.

Lachey's big announcement comes only a week after his ex-wife, Jessica Simpson, tied the knot with the father of her two children, Eric Johnson. Congratulations!