The 50-year-old musician is dating Italian beauty Nefer Suvio - who is 18 years his junior - and says he fell head-over-heels for her when he first glimpsed her exotic look across a crowded room.

Nick told the Daily Mail newspaper: ''It's too early to say if I'm in love, but Nefer and I are close. Our eyes met across a crowded lobby. Her exotic look and sense of style attracted me immediately.''

The 'Save A Prayer' hitmaker and his new girlfriend have been travelling the world together since meeting at five-star Hotel de Russie in Rome.

The former Italian office worker has quit her job and re-branded herself as a fashion stylist, as well as giving herself a new name - Nefer.

Nick explained: ''She is now a stylist. Everything is going great. But we're not living together.''

The keyboard player made their romance official by introducing her as his partner at a champagne party in London's Le Caprice venue for the Vogue On Designers book.

Nick was married to Younkers store heiress Julie Anne Friedman for eight years, but the couple divorced in 1992. They have a daughter together, 25-year-old designer Tatjana.

The 'Ordinary World' rockers - also made up of bassist John Taylor, singer Simon Le Bon and drummer Roger Taylor - are planning to release a new album in 2014. 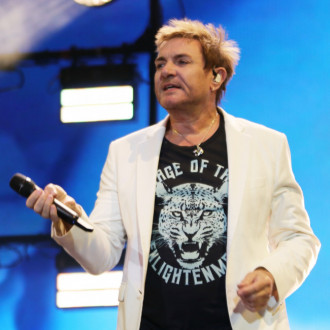