Pink Friday: Roman Reloaded represents Nicki Minaj's definitive foot-plant in the mainstream. Thus far, she's treated the music industry like a platform game, skipping up ladders, skittering around & lashing out at her enemies, shape-shifting and switching identities to avoid capture and here she is at the final level (only for this game, of course, she'll find some new kingdom to conquer soon enough), with her magnum opus, ready to cash in all those gold coins she's been storing in her backpack. 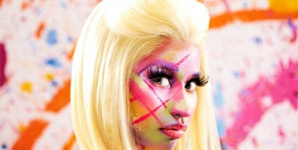 It's a fairly epic release, at 22 tracks. Any shrewd business folk will no doubt be scratching their heads, wondering why she didn't decide to split it into two releases. Kerching! Presumably, though, Nicki Minaj isn't one to worry too much about what the accountants are telling her any more. A recent video of Nicki that was 'leaked' onto YouTube, showed her pre-fame, in all her minimal-make-up, cap-wearing glory. Proof - if you weren't already paying attention - of how far she's come and how she's evolved as an artist.

Unlike many artists that take residence at the top of the charts, Minaj is a thoroughly complex character. On the one hand, she showcases her elegant side on the more dance-orientated numbers, such as 'Automatic,' where she comes on like Rihanna, a dark soulful edge to her vocal, washed out with brash but blissful synths. The other side of Nicki Minaj though - and undoubtedly the side that most people love her for - is her off-the-wall observations, her vocal rollercoasters, the imagery that never sits still for a second. Her snarky, sideways look at the world around her is best represented on the sublimely ridiculous and bitchy 'Stupid Hoe,' as she calls out to her detractors "I'm Angelina, you Jennifer / C'mon b*tch, you see where Brad at." At times, listening to the lengthy Pink Friday: Roman Reloaded is a bit like hanging out with a really emotional friend; you never know from one moment to the next if she's going to be deadly serious and demanding some kind of emotional investment or if she just wants to hang out & flick through gossip magazines, making fun of the idiots therein.

Nicki seems to keen to reinforce the idea that she's playing with the big boys, here, toying with gender 'rules' to get the point across. One minute, the Barbie-doll imagery is at the fore, all blonde wigs, CGI doll eyes (take a look at the 'Stupid Hoe' video for that one) and feminine wile. The next thing you know, she's threatening to stick her d*ck in someone's face and making reference to her impressive set of testicles (or, in Minaj speak "testaaaay"). She's proven that she's got the artistic credibility and commercial pull to command primetime airtime and radio play, share stages with Madonna, baffle the Grammys audience with her 'more-Gaga-than-Lady-Gaga' theatrics and invite the likes of Lil' Wayne, Beenie Man and Rick Ross to provide walk-on parts for her album. She probably could have delivered the message a little more succinctly than a 22 track album though. A little more material on the cutting room floor probably would have given .Roman Reloaded a stronger identity.

Minaj manages to cross over into the realm of popular appeal, without losing sight of the fact that she is utterly, utterly bonkers and, of course, an innovative and original artist. She seems to be trying to do two things at once though; to stay true to her rap-roots but give the clubbers something to dance about at the same time. She does them both pretty convincingly but you can't help thinking most fans will probably fall either in the 'Stupid Hoe' camp or the 'Starships' camp. That said, Nicki Minaj is an artist that's always trading identities; it'd be foolish to expect her to settle on one thing for too long. Level One appears to be complete. Lets see what beast she unleashes next.