Nicki Minaj is undeniably a force to be reckoned with in terms of commercial hip hop. Where numbers and sales are concerned, she's pretty much on top. Prior to her mainstream success she gained respect on the underground circuit with savage spitting. As of late, she's certainly found her lane and audience, but I can't say I'm her biggest fan; too much of her material lacks any content to latch onto, but that hasn't had any impact on her success. 'The Pinkprint', her third album, released through Young Money and Cash Money, is proving to be popular amongst the Nicki faithful, but given my previous discomfort with much of her work, I was unsure what to expect. 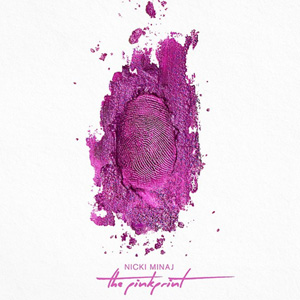 The album opens with 'All Things Go', and although the creepy, haunting instrumental makes for a dark, more mature sound to begin 'The Pinkprint' with, Nicki's lyrical content is still somewhat forced, camouflaged under multisyllabic rhyme schemes that make her sound more convincing than she is in reality. Although the production is consistent and suitable, some of the album's downfalls are the mundane, tired, sure-fire club hits. 'Trini Dem Girls' is not something I want to listen to at all. The already tired 'Anaconda' did not make for pleasant listening either; I'm ashamed to say I threw my iPod across the floor at the relentless, irritating subject matter. I should have known better than to expect any actual lyrical substance. This easy 'cash in' format can also be found in 'The Night Is Still Young', although I'm sure your Saturday night clubber will enjoy this immensely in their natural habitat regardless of the played out nature of the track.

Surprisingly, the thing that impressed me most about this album is Nicki's vocal capabilities. She has a strong, emotional singing voice that sounds at home over the sparse, relatively poppy instrumentals found on this project. A prime example is the Mike Will Made It produced 'I Lied', although even here, as soon as Minaj starts spitting, the mundane subject matter becomes clear. The seductive collaboration with Ariana Grande, 'Get On Your Knees', is pretty dope, although the 'say pretty please, say pretty please, say pretty please' lyric is enough to make you cringe. The collaboration with Beyonce is also pretty good, and Drake's verse on 'Only' is entertaining, although Lil Wayne's appearance is characteristically lack-lustre. The album gets tired though; even Nicki's emotional outpourings become less and less strict to their concept, littered with materialistic and braggadocios references.

'The Pinkprint' is a diverse collection of tracks for sure. Nicki impresses on her honest, melodic vocal performances, but too much of her rapping blends into one continuous, frantic ramble about not much at all. The aggression displayed on 'Big Daddy' and 'Shanghai' is respectable and convincing, but even that isn't true for a lot of the project. This is an album sure to please the already converted, and there are a couple of redeeming features scattered throughout, but it really isn't enough to make me a fan by any means. The beats are pounding, the flows are consistent, but the content just isn't there.