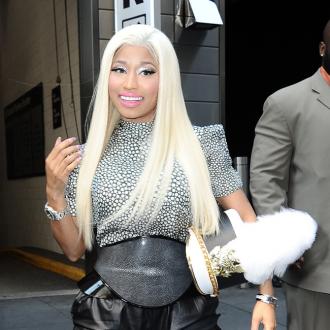 The 'Starships' singer - who falls into a British lilt when rapping as her alter-ego Roman Zolanski on her records - taught herself to speak with an accent by copying her Spice Girls idol's Northern England drawl when she was a child.

Nicki confessed: ''There are so many [I copied], but one person was Scary Spice. I used to listen to her all the time and try to make the same faces she'd make when she was talking. Oh, and Hermione from 'Harry Potter'!''

The rapper recently hit the headlines when she got engaged in a heated row with fellow 'American Idol' judge Mariah Carey, but she insists she has put it behind her.

Nicki admits the spat led to her receiving numerous hate-filled messages on twitter but she is learning to ignore internet trolls and is focusing on staying confident and sticking up for what she believes in.

When asked what the best advice she had learnt about the music business, she explained to The Guardian newspaper: ''Not to react! I've got caught up in reacting sometimes, 'cos I'm crazy. It's better to realise that they're not talking to you, they're talking to your image. I'm not Nicki Minaj.

''But seriously, it's important to know that you're an amazing person. You have to know that as long as you love who you are - your morals, your values, that type of stuff - you're OK. And I have to remind myself of that, I really do. It gets tough.

''I just tell people - don't even come in the business if you think it's going to be peaches and rainbows and unicorns. It's not for the faint of heart. It's for fighters.''