Nicki Minaj Has Blasted Critics After Appearing To "Command" A Disabled Person To Walk At A Las Vegas Club, Insisting The Woman Is Her Friend. 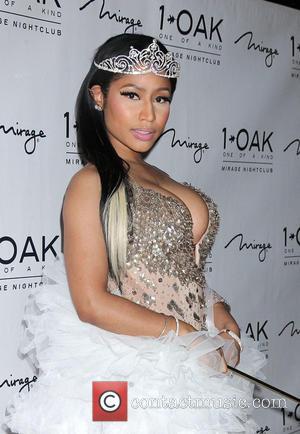 The rapper shared a brief backstage video clip of herself dressed as a fairy princess on Saturday (31Oct15) as she headed to 1Oak, where she was hosting the Haunted Funhouse Halloween bash. In the Instagram footage, the Feeling Myself hitmaker is seen joking around with her pals while waving her wand and saying, "Walk! I command you to walk!", as she points her stick in the direction of a lady who speeds off in a motorised scooter.

Social media critics pounced on the video, accusing Nicki of making fun of a disabled woman, while celebrity blogger Perez Hilton also posted an article about the incident, titled, "Nicki Minaj Uses Her Halloween Wand To 'Command' A Person In A Wheelchair To Walk In Awkward Vid (sic)".

Nicki responded to the backlash on Sunday (01Nov15), when she singled out Perez for spreading false information, suggesting he was well aware the female in the clip was actually her make-up artist Sheika Daley.

"That's NOT a disabled person and u (sic) know that," she wrote, alongside a link to his original tweet. "Are u that desperate for attention?"

Perez defended his blog post by replying, "how was I supposed to know a person in a wheelchair ISN'T disabled?", prompting Nicki to fire back, "B**ch, u knew. That's my friend in a scooter."

She signed off by writing, "Have a great day. I surely will."

The video wasn't the only social media post to land Nicki in trouble on Halloween - she also came under fire for reposting hip-hop star DJ Clue's image of a man wearing a Bill Cosby mask, clutching a bottle of prescription pills, as he drags along another man dressed up as a semi-conscious woman, holding a cocktail in her hand.

"Our generation is so desensitized," Nicki wrote alongside the photo, which DJ Clue had originally captioned, "This gotta stop #PillCosby (sic)."

The insensitive costume references the embattled funnyman's ongoing controversy after more than 50 women made decades-old allegations against Bill, accusing him of inappropriate behaviour, drugging and/or rape.

The Cosby Show star has never been charged with any crime relating to the claims, although he settled one sex assault lawsuit in 2006, after confessing in his deposition to obtaining strong sedatives to give to women he wanted to sleep with.