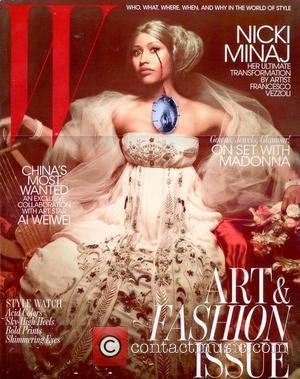 Picture: Nicki Minaj appears on the November cover of W Magazine USA - 24.10.11 This is a PR photo. WENN does not claim any ownership including...

'Super Bass' rapper Nicki Minaj, known for her pink wigs and extravagant outfits, has topped a list of this year's most popular Halloween outfits. Although there aren't any official costumes available, fans have been frantically visiting video tutorials and blogs in order to put the finishing touches to their Minaj outfits for ghoulish parties over the coming weekend, reports the New York Daily News.
The rapper, who hails from Queens, New York, was the highest placed personality on the list of this year's most wanted Halloween outfits. Based on Google searches, only the ever-popular 'Playboy Bunny', 'The Black Swan' and 'Angry Birds' placed higher. She beat out other popular figures for 2011, including actor Charlie Sheen and the comic book character Captain America. In a YouTube tutorial with over 300,000 hits, one individual shares makeup tips and advice on how to pick the best wig to match Nicki's inimitable pink style. In another video, one costume expert explains the best way to emulate Minaj's signature derriere, saying, "What's the secret? Diapers. Just stuff 'em in there and use like five. You can make it as big or as small as you want. ... I think that's going to be my favorite part ... just having a big ass for Halloween".
Some celebrities are already getting in the Halloween mood, with model Heidi Klum continuing her long tradition of dressing up for a star-studded bash. This year, the Project Runway judge will wear a 'Monkey' outfit to a party at the Ph-D Rooftop Lounge in New York on Monday.