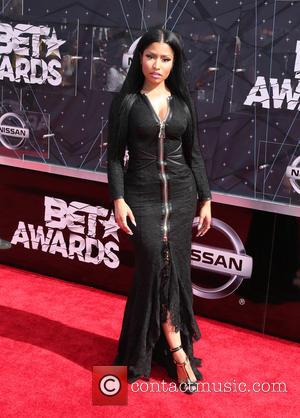 The rapper was due to hit the stage before David Guetta's headlining performance at Finsbury Park, but when organisers lost touch with her, they had to alert fans to the fact she had been delayed.

A message which flashed up on screens around the main stage read: "We are told that she was due to be speeding down the M1 (motorway) from Luton Airport as we speak but we have lost contact with her, we are hoping that she will be here soon."

But Minaj, who performed in Denmark on Saturday night (04Jul15), was caught up in traffic congestion caused by a car fire, and she failed to make it in time.

Fans booed as it became clear Minaj wouldn't be performing, and many immediately took to social media to demand refunds from festival bosses.

The night before Minaj wowed crowds at the Roskilde Festival in Denmark by hitting the stage in a skimpy, cleavage and buttock-baring all-black outfit.

She wore a black bra and thong set with see-through black netting covering her arms and legs.