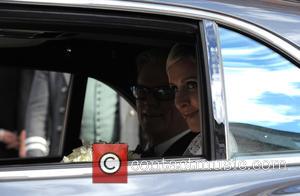 The blushing bride, 31, stunned in her $80,000 (£50,000) Valentino couture lace gown, which featured long sleeves and a high neck. She finished off the look with a cathedral length lace veil, while her older sister Paris donned a floor-length blue gown as maid of honour.

Hilton family friend Lionel Ritchie is said to be performing at the newlyweds' reception.

The marriage is the groom's first and Hilton's second - she was previously wed to Todd Meister, but had the Las Vegas union annulled just three months later.