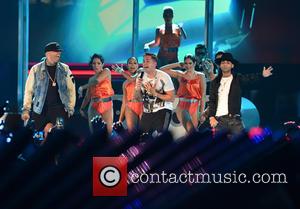 The singer's El Perdon collaboration with Enrique Iglesias will compete for Song of the Year and Favorite Collaboration, while he and the Hero hitmaker will face off for Artist of the Year, alongside Romeo Santos, Calibre 50, and Julion Alvarez y su Norteno Banda.

Iglesias is also up for Favorite Male Artist - Pop/Rock, while fellow five-time nominee Balvin will do battle for New Artist of the Year.

Santos, Mana and Calibre 50 each boast four nods, while other notable nominees include Ricky Martin and Prince Royce.

Demi Lovato, Ellie Goulding and Meghan Trainor are all up for Favorite Crossover Artist, and former couple Selena Gomez and Justin Bieber will go head-to-head for Favorite Dance Song with their respective hits I Want You to Know with Zedd, and Jack U's smash Where Are U Now.

The first ever Latin American Music Awards will be broadcast live in the U.S. at the Dolby Theatre in Los Angeles on 8 October (15).