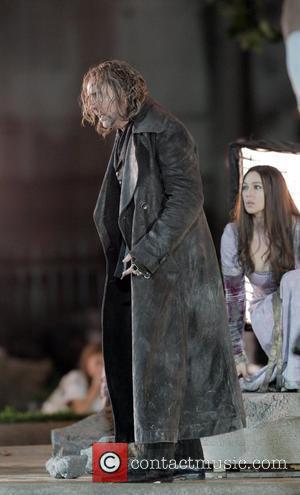 Picture: Nicolas Cage and Monica Bellucci film a romantic scene in The Sorcerer's Apprentice at a park in Manhattan. BSC.MWD.ZO7

Nicolas Cage's new movie {THE SORCERER'S APPRENTICE] was turned into a washout by the second wettest June in New York's history.
The city was hit with more than double the usual levels of rainfall, causing cast and crew members on the fantasy film a series of logistical nightmares.
Producer Jerry Bruckheimer explains, "In 38 days on set, we had 32 days of rain, which didn't help us."
As soon as shooting finished, the sun came out and summer kicked off in the city, pouring further salt in Bruckheimer's wounds.
He adds, "It's beautiful now. That's why - because we've finished filming."
The weather was just one of a number of problems to hit the movie's Manhattan set - a number of crewmembers and onlookers were hurt in two separate car crashes, prompting rumours Cage hired a voodoo priestess to remove a curse from the movie; claims he later denied.