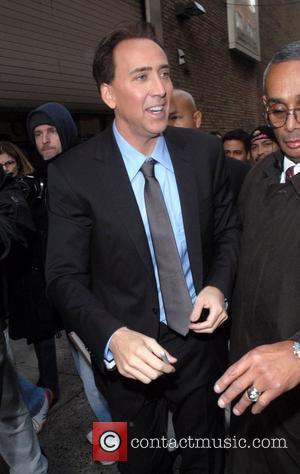 Nicolas Cage agreed to a cameo in Quentin Tarantino and Robert Rodriguez's double bill GRINDHOUSE for nothing. The Con Air star briefly plays Chinese villain Fu Manchu in a mock trailer for fictional film WEREWOLF WOMEN OF THE S.S., which airs between Rodriguez's PLANET TERROR and Tarantino's DEATH PROOF movies. The cult directors' pal Rob Zombie shot the quirky trailer, and Cage admits his cameo cost the former White Zombie frontman dinner. He says, "I did it as a favour for my old friend Rob Zombie, over dinner one night. No money exchanged hands. I didn't know anything about it. "Rob said, 'Tarantino and Rodriguez are doing these features, and in between them there are these trailers for movies, which don't exist.' Rob said he was doing Werewolf Women of the S.S., and did I want to play a Nazi? I said, 'Well, I'm not real comfortable with that.' "He goes, 'Well then, would you play Fu Manchu?' 'Yeah, I might do that,' I said, 'but I don't want to wear any gloopy Asian make-up. I had my own weird ideas about what Fu Manchu would be doing. "Then I went on the set of Grindhouse later and (producer) Bob Weinstein wanted me to do press and all that, and I went, 'Whoa, whoa, whoa, I just did this for Rob, for fun, nothing else.' I didn't want to mislead people into thinking I'm in a big role in this movie, it's not like that." Cage isn't the only big name making a cameo in Grindhouse - Bruce Willis appears fleetingly as a half-man-half-mutant in Planet Terror, while respected German actor Udo Kier plays a twisted Nazi in the Werewolf Women of The S.S. trailer.