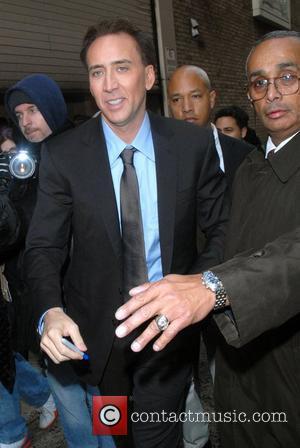 Nicolas Cage returned to the site of his first date with new wife Alice Kim when he became part of the first film crew allowed to shoot on the Havasupai Indian reservation in the Grand Canyon. The actor shot scenes for new thriller Next at the sacred site, located on the floor of the Grand Canyon in Arizona and the experience reminded him of his romantic first date with Kim. He says, "We were dropped off by helicopter at the bottom of the Canyon, and we went for a hike. I met all these wonderful Native Americans. It was the most beautiful place I'd ever seen. "I thought, 'No one's ever seen this area, its gorgeous, there's a waterfall and fantastic rocks, and it's right in our own backyard.' "I wanted to share that with the audience through this film." But producer Arne L. Schmidt admits filming at the bottom of the Grand Canyon was a logistical headache: "We took a third of our normal crew, about 54 people. "It was 105 degrees at the bottom, so we went through plenty of water. No other movie has ever been shot there. "The Havasupai people don't like to be photographed, but Nic had been there several times before and he'd bonded with them. I'm sure that's why their tribal council gave us their permission."