Nicolas Cage took his son Kal-El to meet Spider-Man after the pair watched a performance of 'Spider-Man: Turn Off the Dark' on Broadway. 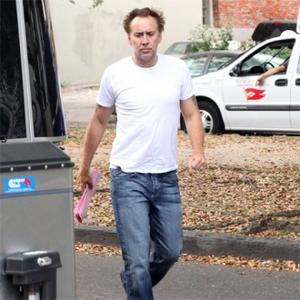 Nicolas Cage's son told Spider-Man he wanted to "fly" with him.

The actor took his six-year-old boy Kal-El to watch the Broadway show 'Spider-Man: Turn Off the Dark' and afterwards he got to meet lead actor Reeve Carney, who plays the web-slinging superhero in the New York production.

During the behind the scenes tour, Kal-El told Reeve has was named by his dad Nicolas after fellow comic book hero Superman and insisted he would have joined him for some superpower fun if he'd brought his cape.

Speaking to the New York Post newspaper, a source revealed the schoolboy told the actor, "I'm Kal-El. This is my dad. I was named after Superman. I'd fly with you, but I don't have my cape."

Nicolas is a huge Superman fan and recently sold a rare comic book for over $2.1 million.

The comic - which Nicolas purchased in 1997 for around $150,000 -features the debut of Superman in popular culture and is believed to be one of only 100 left in existence.

It was graded at 9.0, making it the best condition of an 'Action No. 1' that has ever been graded by the leading comic book grading company, Certified Guaranty Company.