Nicole Kidman was the belle of the ball on the red carpet at the Cannes Film Festival on Thursday evening (23.05.13), wearing the Valentino gown Anne Hathaway was supposed to wear to the Oscars. 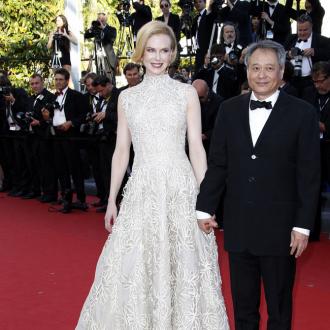 The Australian actress was the picture of elegance at the 'Nebraska' premiere on Thursday (23.05.13) in a stunning ivory lace Valentino Haute Couture gown, which was originally supposed to be worn to the Academy Awards by Anne in February.

The 'Les Miserables' actress had chosen the floor-length dress for the event, but changed her mind at the last minute, opting for a pink silk Prada look to pick up her Best Supporting Actress gong instead.

Valentino had announced Anne would be wearing their lace creation prior to the event, so she was later forced to issue an apologetic statement, saying she had discovered someone was due to wear a similar-looking dress.

The intricate flower-detailed gown has finally had its moment in the spotlight, earning Nicole the best dressed title as she walked the red carpet hand-in-hand with her fellow Cannes juror, 'Life of Pi' director Ang Lee.

The 45-year-old star complemented the high-necked look with drop earrings and a low chignon, looking every inch like the late princess of Monaco, Grace Kelly, who she portrayed for an upcoming biopic last year.

Nicole has set the bar high in the style stakes since arriving at the festival in the south of France, for which she and her fellow jurors are tasked with choosing the top Palme d'Or prize.