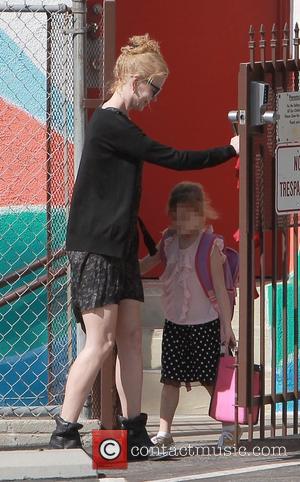 Nicole Kidman features as the cover girl for the next issue of Vanity Fair magazine, striking a pose that echoes the former glamour of Princess Grace of Monaco, who Nicole will be portraying on film in an upcoming biopic about the late Hollywood royalty turned actual royalty. In her interview, she didn't just discuss her role and the late Princess, as she also discussed ehr relationship to current husband Keith Urban and former husband Tom Cruise at length too.

It was a revealing and informative chat from Kidman, who is clearly relishing her role as Princess Grace, not to mention her current love life with country star Urban, who recently spoke to Ellen DeGeneres about their use of sexting to make it through long periods of separation. But it was when she began discussing her previous husband, Tom Cruise, when things began to get a little more juicy, as she recalled their "intoxicating" love for each other.

“There is something about that sort of existence that, if you really focus on each other and you’re in that bubble, it’s very intoxicating, because it’s just the two of you,” Kidman told December’s Vanity Fair. “And there is only one other person that’s going through it. So it brings you very close, and it’s deeply romantic. I’m sure Brad and Angelina have that — because there’s nobody else that understands it except that person who’s sleeping right next to you.”

The Aussie actress, who married Tom at 23, went on to say how she now feels she went ahead with the marriage way too young, but is still glad it happened. She continued, "With no disrespect to what I had with Tom, I’ve met my great love now. And I really did not know if that was going to happen. I wanted it, but I didn’t want it for a while, because I didn’t want to jump from one relationship to another. I had a lot of time alone, which was really, really good, because I was a child, really, when I got married. And I needed to grow up.”

The full interview is available in the December issue of Vanity Fair. Nicole will also feature in the December edition of British GQ