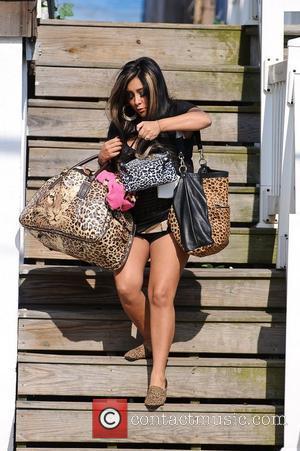 Picture: Nicole Polizzi The Cast of 'Jersey Shore' out and about Seaside Heights, USA - 07.06.12

Snooki's nude photos may have leaked online this week, but the Jersey Shore star has come out fighting. Images of the 24-year-old hit the internet over the weekend, showing her in an open white bathrobe before she fell pregnant to fiance Jionni LaValle.

The leak is obviously bad timing for the reality star, who is due to give birth to her first child in September. A representative for Snooki - real name Nicole Polizzi - has issued a statement to US Weekly magazine slamming those responsible for the leak, saying, "Clearly these are old and personal photos that were not meant for the public.It's a shame someone decided to leak them for obvious personal gain". Back in 2010, reports emerged that nude pictures of Polizzi were doing the rounds, though she denied it at the time. It's not been a great week for the cast of MTV's Jersey Shore, with Snooki's cast-mate Jenni Farley reportedly becoming involved in a New Jersey bar brawl, while Deena Cortese was arrested for 'slapping' passing cars while visibly intoxicated.

Jersey Shore began filming its sixth and final season in Seaside Heights, New Jersey, last week. There had been rumors that Mtv bosses were having difficulty creating storylines for the new series following Snooki's pregnancy, though it appears they have found a way to in- cooperate her without focusing on debauchery, drinking and hard-partying.