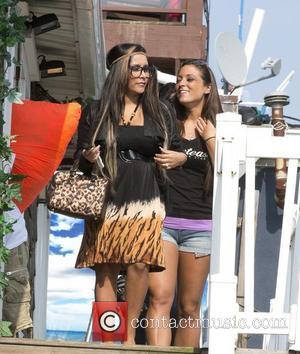 Snooki isn't having the greatest of weeks, what with the leaking of several nude pictures, though she had some exciting news to reveal on Good Morning America on Monday (June 11, 2012).

The reality star, real name Nicole Polizzi, says she has finally decided on baby-names for her and husband Jionni LaVelle's first child. The MTV star said, "I think we're going to do Lorenzo.Because then you can call him 'Enzo". If it's a girl, Snooki revealed that she would be called 'Giada'. Interesting names, though we couldn't help but wonder why they were chosen? Being one of the biggest reality stars around, perhaps Snooki chose 'Lorenzo' after the cosmetics entrepreneur Lorenzo Borghese who starred on the 9th season of ABC's show 'The Bachelor'. Or maybe, Snooki has a penchant for fast cars and plans to name little Enzo after Enzo Ferrari. Who knows. During the interview this week, the 'Jersey Shore' star also spoke of her pregnancy fears, saying, "Pregnant people shouldn't be in a bar, I feel.All my friends are like, 'you can have a glass of wine.' I'm like, 'No.' I refuse because I'm going to be that person that has a glass of wine and [the] baby comes out with three legs".

Meanwhile, Snooki's representative has hit back at those responsible for the explicit leaked photographs, telling US Weekly, "Clearly these are old and personal photos that were not meant for the public.It's a shame someone decided to leak them for obvious personal gain".