Nicole Richie was ''crawling on all fours'' while watching Britney Spears in Las Vegas last night (18.02.14). 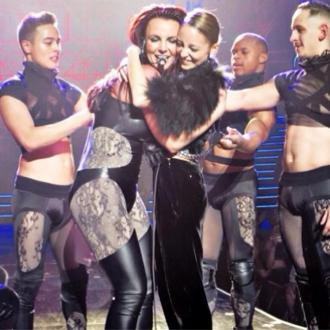 Nicole Richie was ''crawling on all fours'' while watching Britney Spears in Las Vegas.

The reality star-turned-fashion designer went to support the 'Perfume' singer during her residency at Planet Hollywood Resort and Casino last night (18.02.14) and enthusiastically danced and sang along to the show.

Britney took to her Twitter account to thank the 32-year-old star for going to see her perform.

She posted: ''Can we all give a round of applause to @NicoleRichie for playing along in the show tonight? U looked hot crawling on all fours ;). (sic)''

Nicole also posted two photographs on Instagram of her at the show and in one she is seen holding up a Britney Spears' t-shirt, after she was invited up on stage.

Wearing a stylish black outfit and fur jacket, Nicole can be seen laughing stood next to the brunette superstar and the pair are surrounded by scantily-clad male dancers.

Another snap shows Nicole with her arms around Britney, 32, who is wearing a black leather and animal print one-piece, accompanied with the caption ''#GOODBYE'' and the tag 'Vegas b*itch'.

Nicole has been a huge fan of Britney since she was a teenager and previously posted a video of her copying the star's signature dance moves.

She said: ''I have been a huge Britney fan since I was 16 and have been to all of her concerts.''