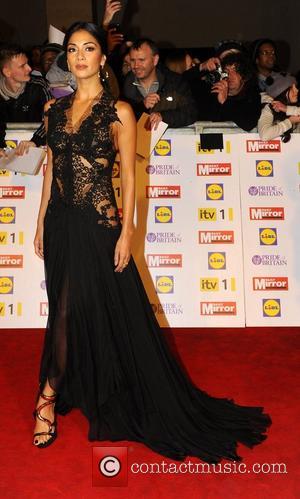 Nicole Scherzinger has finally put straight rumors that she is dating Rihanna's ex-boyfriend Chris Brown, describing a photograph of the pair getting close as being completely innocent. Speaking to The Sun newspaper, Nicole claimed her cosiness with Brown, 23, at a Los Angeles nightclub was not what it seemed.

"You are always going to have people saying something or having a picture. But it is complete dross if you and your partner know what the truth is." Of course, Scherzinger is still in a relationship with Formula 1 driver Lewis Hamilton, which basically made the photograph a huge deal last month. The former Pussycat Doll star added, "Chris Brown and I are definitely just mates - I have known him since he was younger than 16. We were just talking. Even my mum said, 'I saw a picture of you'. It's the same when Lewis had some random girls sitting in the lobby." Hmm wasn't it a little more than that Nicole? In July, Hamilton caused a stir after reportedly inviting women back to his London hotel following a night out with rapper J Cole. However, Nicole, 34, insists "Can't girls just be sitting in the lobby? Maybe they were going to the same party."