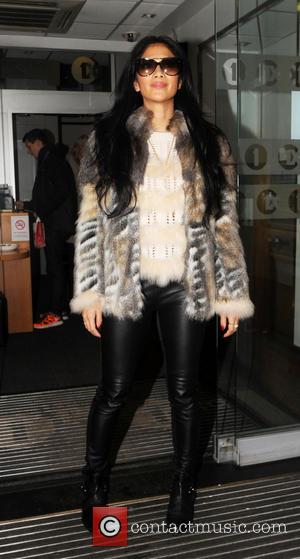 We’re not entirely sure why James Arthur and Nicole Scherzinger rolled into Middlesborough on the back of two Harley Davidsons today (December 4, 2012). But they did. And Nicole made sure that she looked every bit the superstar, just in case James was under any illusion that he might be the star of the show at his emotional little homecoming trip.

That’s right folks, it’s that time on X Factor, when the camera crews decamp to whichever unremarkable British town the finalists happen to hail from, feed a group of schoolchildren a barrel-load of E numbers and force them to act excited about their returning alumni and film their family members quivering with tears (presumably because they know that their intolerable offspring will be returning to the unremarkable British town with an unmanageable ego that will take years to deflate when they lose to Christopher Maloney in the final).

The main point of this trip to Middlesborough, though, isn’t just to catch up with an over-dramatised account of James’ life in the land of the parmo, but to see what Nicole Scherzinger looks like in biking leathers. The answer to that, of course, is that she looks pretty hot. There she was, all trussed up in knee high boots, tight black trousers, dark shades, leather gloves and a leather biker jacket, whilst James looked visibly frozen, forced to keep his hands in his pockets to keep them warm. We guess the wardrobe budget for the day couldn’t quite stretch to two pairs of gloves, then.