Nicole Scherzinger teamed up with a drunken sailor, Captain Morgan, in Cannes today (14.09.15) and learned how to make mojitos. 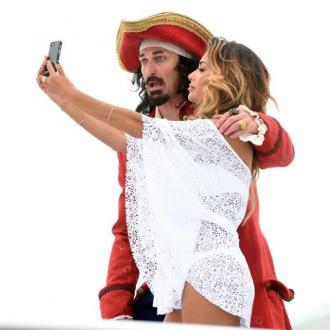 Nicole Scherzinger has been partying with a rum-swilling pirate.

The former Pussycat Dolls singer was joined on a yacht in Cannes in the South of France today (14.09.15) by the moustached marauder Captain Morgan.

And rather than get away with all of her gold, he decided to share a tipple or two with the brunette beauty and teach her how to make a decent mojito cocktail.

Nicole posted on Facebook: ''So turns out I make mojitos like a PRO! Well, with the help of my new friend Captain Morgan (sic)''.

The 'Don't Cha' hitmaker danced on the bow of the luxury vessel and served drinks to bemused paparazzi - who photographed the wild moments - and posed with the Captain in a white lace camisole over a skimpy bikini.

Speaking at the event, she said: ''Big shout out to Captain Morgan! Who else would launch their new white rum like this?! I had a ball on my last summer vacation of the year. Mojitos all round!''

Nicole, 37, travelled to the French coast to catch the last of the Mediterranean sun and mark the launch of new Captain Morgan White Rum.

And the pop star - who parted ways with her record label earlier this year - revealed she's looking to the future with a sense of ''renewal'' in her life and is grateful for the year she's had.

She wrote on Facebook: ''Reminiscing over these beautiful French sunsets. So ‪#‎grateful‬ for everything...the good and bad, the laughter and tears. ‪#‎renewal‬ ‪#‎rebirth‬ ‪#‎believe (sic)''