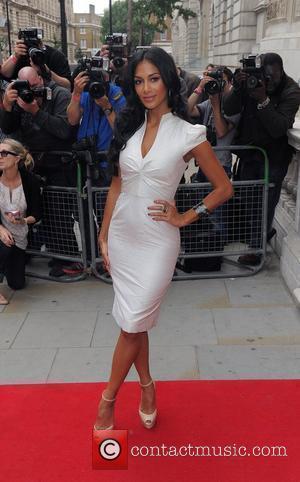 Nicole Scherzinger insists she did not kiss Chris Brown in a Hollywood nightclub. Some grainy photos of the pair have made their way online and Chris certainly seems to have Nicole in an uncompromising position – but you can’t say for certain from the photographs, whether the two of them were smooching or not. The X Factor judge Nicole has insisted that she was just chatting to Chris Brown at Hollywood’s Supperclub and that they’d had to get close so that they could hear each other talk.

The former singer for the Pussycat Dolls is adamant that her relationship with Brown is purely platonic. She and Chris were both in attendance at the club as part of a “star-studded line-up hosting the Black Pyramid Party,” on Tuesday night (September 25, 2012) according to the Press Association. Her rep told the press “There is absolutely no truth to the ridiculous story regarding Nicole and Chris Brown. The photos that have surfaced are old friends who were trying to talk at a very loud club. I guarantee there will be no photos of them kissing.”

This will be a relief to Rihanna of course, who is thought to be rekindling her romance with the R&B singer. On Monday, she even tweeted a message of support to him as he appeared in court to answer the case of a failed drug test which he was asked to take as part of his probation terms. The probation, ironically, relates to his 2009 assault on Rihanna, for which he was convicted.