Night Moves present their debut album 'Colored Emotions' four years after they formed. That's a lot of time for them to create something with brilliance. 'Colored Emotions' does ten songs in just over half an hour; was there any need for the release to take the best part of four years? Well, it was previously up as free download, before they probably realised the record had too much potential for listeners to nab for free and they made some tweaks. Three songs come under the two-minute bracket. 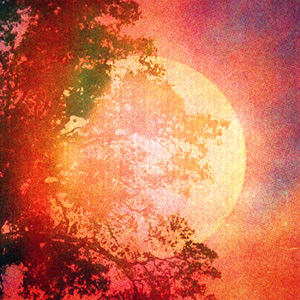 'Headlights' is a sparkling opener and sees vocalist John Pelant wail, "I just don't know who I am", over the hearty strums and roughened harmonica. It gives hope for the rest of the album, which does prevail, but only momentary pinnacles of greatness give the record something to brag about. It could be playing on one big loop as the same track and you wouldn't really take much notice. 'Colored Emotions' is very much background music in parts. Especially in 'Classical Hearts' and 'In The Rounds', which is only 68 seconds long thankfully, nothing grabs you.

When the musical peaks jump out of hiding, it's sneaky but sounds special, like the Minneapolis trio are on to something. 'I never wanted your love' releases Pelant in 'Old Friends', gradually getting higher and (slightly) squeakier. The complimenting folky riff and soft thumping drums make it a sure crowd pleaser. 'Put Out Your Shoulder' follows, igniting in a casual rumble with a similar rhythm, which kind of proves my point about the loop. If you didn't have the track listing you wouldn't know how far into the album you were; the songs just merge together, united in an odd bubble of reverb-y psychedelic rock/folk. Elements of the album do have a Tame Impala or Band of Horses feel. The end of 'Country Queen' lands with a thud, with some hazy riffs before calming down to just a few sparse strums, sounding like an Oasis castoff.

The euphoric chorus that rocks 'Family Tongues' is single-worthy and one of the high points on 'Colored Emotions'. 'Horses' is another with a slick instrumental to finish, but title track 'Colored Emotions' just sits flat, ending the album in a dull way. Night Moves have some defining moments of genius on this record, but they are outweighed by its lack of clarity and laboured repetition among tracks.